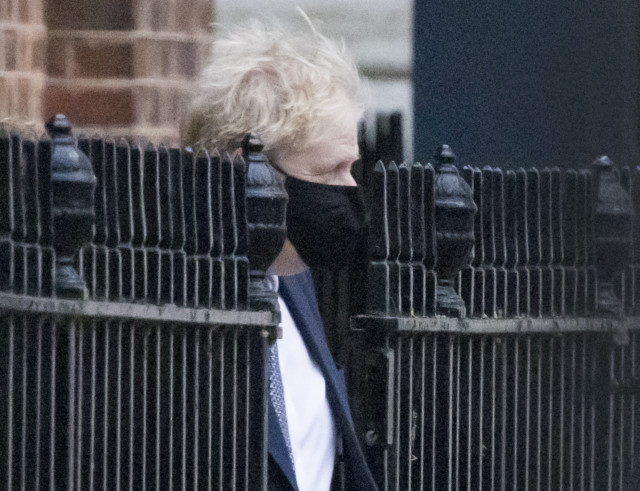 BORIS Johnson today begins a do-or-die week for his premiership as the imminent Partygate probe is poised to decide his fate.

The PM is also fighting an Islamophobia row, claims of government blackmail and fury at looming tax rises as the cost of living bites.

Most are waiting for Sue Gray’s make-or-break report into the avalanche of Downing Street bashes – which is now due any day.

Mr Johnson will scramble to get on the front foot this morning as he speaks to reporters on a visit to Buckinghamshire.

He has been pleading with disgruntled Tory MPs to hold off submitting letters of no confidence until Ms Gray’s report is published.

Dozens of fed-up backbenchers are poised to write letters if the probe’s findings are damning, or showed the PM endorsed or lied about rule-breaking parties.

A flurry of letters could tip the total number above the 54 threshold that would trigger a vote of confidence in Mr Johnson’s leadership. Mr Johnson has vowed to fight any contest.

Nerves in No10 have spiked after it emerged Mr Cummings is giving evidence to the probe – and is expected to speak to Ms Gray today.

The PM’s vengeful ex aide-turned-enemy has repeatedly lobbed grenades into the Partygate saga with numerous allegations.

Downing Street police have also reportedly been quizzed about the alleged boozy gatherings and could swing the findings of the report.

Yesterday Dominic Raab refused to confirm the probe would be published in full, risking the fury of MPs.

He said: “I am not quite sure the shame and form it will come… but she will come back reasonably soon, and people can see it.”

The Deputy PM said if the PM was found to have misled MPs then “it’s a resigning matter”.

Last night the Scottish Conservative Chief Whip said the PM’s resignation was now “an inevitability” .Stephen Kerr said the report and it’s fallout was likely to trigger a no confidence vote.

He said: “Regardless of the outcome of that vote, as we saw with Theresa May, there’s an inevitability of what follows.”

Heading off a brewing mutiny, Mr Johnson’s allies have been pressing the flesh to shore up his support in the Tory ranks.

The PM himself spent the weekend hammering the phones from his Chequers country retreat to convince wavering MPs to back him.

But the whipping operation has opened up a whole new challenge after senior Tory MP William Wragg accused No10 and ministers of using “intimidation” and “blackmail” tactics to strongarm MPs into submission.

Mr Wragg claimed that MPs were threatened with embarrassing press stories about them if they failed to back the PM.

He is set to meet Scotland Yard detectives this week to discuss his evidence.

At the same time the PM is facing an Islamophobia row after Tory MP Nusrat Ghani claimed she was sacked as a minister because of her religion.

Mr Johnson today launched a Cabinet Office inquiry into her allegations that she was told her “Muslimness” was “making colleagues uncomfortable”.

Ms Ghani, the former shipping minister, said she approached the PM at the time in early 2020 but was then denied a government inquiry.

After making her accusations public this weekend, Cabinet Ministers Sajid Javid and Nadhim Zahawi piled pressure on the PM to investigate the claims.

The row has also dragged in Chief Whip Mark Spencer at the crucial time for Mr Johnson’s premiership.

Mr Spencer outed himself as the whip who spoke with Ms Ghani at the time – but strenuously denied her allegations.

The Tory civil war has also been flared with anger over the Government’s planned tax rises.

Senior Conservatives have demanded Mr Johnson delay the 1.25 per cent National Insurance rise as families struggle with the cost of living.

Ex-Cabinet Minister David Davis, who last week called for Mr Johnson to resign, became the latest to call for the delay today.

He told the BBC: “It was a judgment made on, frankly, quite a lot of wrong data.

“Therefore they didn’t know quite what pressure there would be on ordinary people.”