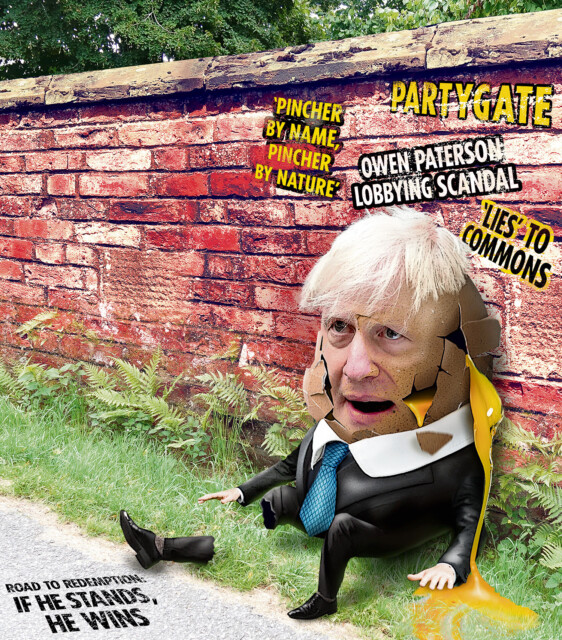 IS BoJo the Terminator – a shape- shifting cyborg, returning to wreak vengeance on his enemies?

Forgive the yolk but we now live in a make-believe fantasy world, an “I’m A Political Celebrity” reality show where anyone can take a pop at being PM.

Boris Johnson, the political Joker who makes half the nation smile while the rest are spitting chips, is gearing up for another pitch at the premiership.

If he runs, he wins — that’s my prediction for what it’s worth in this tumultuous here-today, gone-tomorrow blur of Tory leaders, challengers and assassins.

And even if he doesn’t win, what a pleasure to hear the screams of fury from Labour, Lib Dems and Scot Nats — amplified through the impartial BBC’s 100-decibel speakers.

It takes a heart of stone not to laugh as Labour luvvies like Stephen Fry wail “no, no, no, no, NO”.

Or Blairite blowhard Alastair Campbell, of all people, bellowing “liar” whenever a microphone comes within range.

Or the spittle-flecked Tory Angry Brigade, the mostly Remainer refuseniks who loathed Boris Johnson from the moment he persuaded Britain to vote Brexit in 2016.

These puce-faced wets don’t seem to realise they are fuelling the pro-Boris momentum which might propel him back into Downing Street and even produce another sensational election win.

Happily, their moans are drowned out by cheers from Red Wall Tory MPs who credit Boris with winning their seats in Parliament.

They want Boris back and so do millions of voters across the land.

It may be deeply irresponsible to say so, but this is diamond-studded 24-carat political entertainment and I for one am enjoying the ride.

Don’t get me wrong — I am not ­watching BoJo: The Movie through rose-coloured glasses, or even suggesting that it makes sense.

Boris Johnson must take much of the blame for the catastrophic mess the country is in, politically and economically.

But he won his 2019 80-seat landslide majority fair and square.

It was an almost entirely personal achievement beyond the reach of any other politician.

He used that majority to achieve great things, ramming Brexit through Parliament, the Covid vaccination triumph and leading global support for Ukraine.

He also blew it as the “Greased Piglet” PM who believes rules are for little people, not him.

True blue MPs hated his costly “green crap”, his failure to cut immigration, the spending and borrowing splurge, the favours for dodgy Tories and — worst of all — allowing parties in Downing Street the night before the Queen sat alone at Prince Philip’s funeral.

It was such casual conduct that handed Labour grounds for a kangaroo court trial for lying to Parliament — a hurdle still to be cleared.

But for such careless affronts to good governance, Boris Johnson would still be Prime Minister right now.

The Pound would be steady, mortgages manageable, inflation past its peak.

We would not have seen the eye- popping political convulsions which turned Britain into a global laughing stock.

The soap opera is not over yet.

Whoever wins next week must choose a new Cabinet and pick a way through the ruins.

If it is Boris, it should at least end the clamour — choreographed yesterday across all BBC networks — for a snap General Election.

Boris won’t have to face the tricky ­question: “Who Voted for You?”

He can cite the 14million adults who handed him that stunning 80-seat majority in December 2019.

For most of the three years since, he has eclipsed Labour’s Sir Keir Starmer as the man voters want to lead the country.

He could do it again. If he wins next week, grumpy Tory Remainers will need to wake up and smell the coffee.

Any MP who resigns the whip and forces a by-election will not simply reduce the Government majority.

They will betray those Tory MPs still fighting for their lives.

Without Boris, the Conservative Party faces certain defeat by 2025.

Boris has the magical Heineken ability to reach voters other politicians cannot reach.

It’s a gamble, a glitterball Who Dares Wins test of luck and daring.

Even Netflix couldn’t make it up.

But for the Tories, it is the only game in town.

More asylum claims this year than at any point in almost TWENTY YEARS, new...