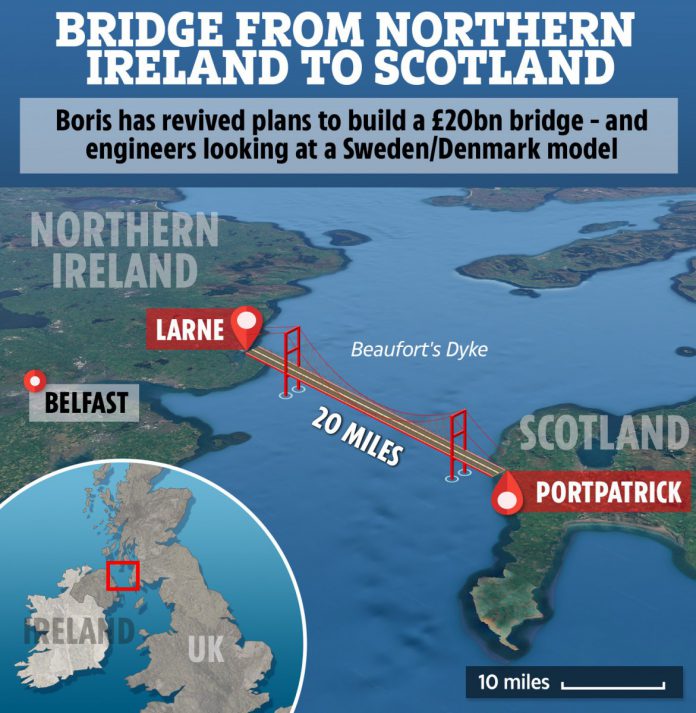 BORIS Johnson is completely serious about building a bridge from Scotland to Northern Ireland to boost the union.

The PM has ordered officials in Whitehall to look at the project and whether it’s possible.

A Whitehall source told HOAR: “There were some people who thought the Channel Tunnel was a mad idea at the time.

“We are looking at the feasibility of a bridge and if it could be made to work.”

The bridge is estimated to cost around 20billion – and engineers are examining whether the bring between Sweden and Denmark could act as a model.

The PM is keen to sign off on a series of bold projects during his time in office.

And a bridge across the 28mile gap between Scotland Northern Ireland has been a plan of his for some time.

Just after he became Tory leader the PM was reported to have asked Government officials to look into the costs and risks.

And he raised the idea when he was Foreign Secretary too, claiming it would shore up the union.

He insisted at the time he was serious about the idea, telling the Sunday Times: What we need to do is build a bridge between our islands.

It would likely run from Portpatrick in Scotland to Larne in Northern Ireland.

Part of it could be a tunnel too, as a way of dealing with the offshore dumpsite Beaufort’s Dyke.

Unexploded World War Two bombs are believed to be one of the risks of the project, which lie near the dump.

Critics have blasted the plans as a waste of public cash, but the PM believes it would ease the strain on air routes and show he was committed to cementing the union too.

Boris is a fan of huge infrastructure projects – with plans for a garden bridge across the Thames when he was Mayor of London.

And he got officials to look into the idea of an new hub airport in the Thames Estuary too, dubbed ‘Boris Island’.

The PM is this week expected to give the go ahead to another huge infrastructure project – HS2.

But he also set to announce a series of other smaller infrastructure projects to go alongside it too.

How to breed horses in Minecraft