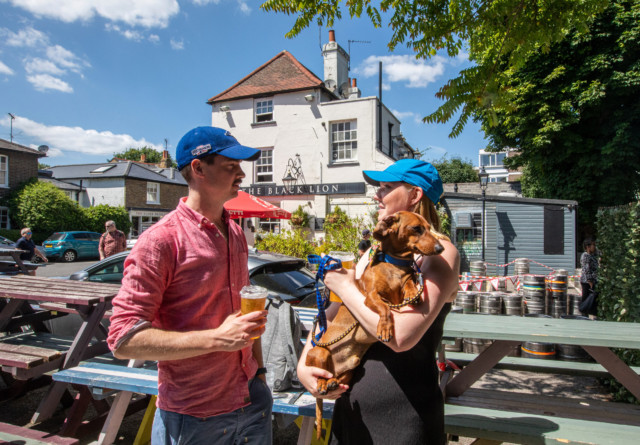 BORIS Johnson will tomorrow unlock lockdown Britain — by announcing social distancing is to be cut to one metre from July 4.

No 10 hopes it will kickstart the stalled economy by allowing pubs, restaurants, hotels, hairdressers and cinemas to reopen. Meanwhile families and friends will be allowed to visit each other’s homes and stay overnight for the first time since restrictions were imposed on March 23.

Officials were last night still ironing out the details of the PM’s announcement.

But Government sources said the new rules would likely allow people from different households to mix indoors as long as they remain socially distanced.

Hugging and other body contact is expected to remain banned.

The move is likely to be similar to new Northern Ireland rules which will allow six people to meet indoors from tomorrow.

The PM will also give the green light for hotels and B&Bs to reopen from July 4.

Cutting social distancing by half will be a lifeline to the economy’s hospitality sector, among the hardest hit by lockdown.

But pubs and restaurants will have to adhere to extremely strict rules, including compulsory masks, perspex screens on tables and spaced seating.

Pub and bar-goers may have to hand over contact details on arrival so they can be swiftly traced by public health officials if there is a virus outbreak.

Customers may be asked for ID when they order food or drink at pubs and restaurants so their details can be recorded.

The PM’s announcement will come after Britain had the lowest daily death toll since mid-March and the number of new cases dropped to below 1,000 for the first time since lockdown.

Downing Street confirmed last night that cinemas, museums and art galleries will be among venues allowed to reopen from July 4. For the first time since March 23, friends and family will be able to visit each other’s homes But No 10 warned the “handbrake” could be slammed back on if there is a spike in new infections.

A Downing Street source said: “We are only able to move forward this week because the vast majority of people have taken steps to control the virus.

“But the more we open up, the more important it is that everyone follows the social distancing guidelines.

“We will not hesitate to reverse these steps if it is necessary to stop the virus running out of control.”

Cabinet will meet at 10am tomorrow to rubber-stamp the plan.

Mr Johnson will then make a formal announcement in the Commons at lunchtime.

He thrashed out the details, including the review of the two-metre social distancing rule, in a meeting with senior Cabinet ministers and scientific and medical advisers today.

It is understood it will also automatically allow any venue with an alcohol licence to serve their drinks to take away.

The PM’s spokesman said: “There is a Covid Bill which will look at new ways of working as the country recovers from the disruption caused by coronavirus and which is intended to help businesses through the summer months, in particular.”

But No 10 played down the prospect of Sunday trading rules being relaxed to help shops recover from the crisis. It is feared Tory backbenchers would defeat the plans.

It was unclear last night whether gyms and swimming pools will be among facilities allowed to open.

Industry leaders have warned the PM it will damage the nation’s health if pubs and restaurants are allowed to open before gyms. They say there is no scientific evidence that gyms are a significant infection risk — and chlorine in swimming pools kills the virus.

Huw Edwards of gym industry body UKActive said: “The fitness and leisure sector hopes for clarity today, having proven to government it is ready to reopen by sharing its comprehensive health plans.

“Let’s be clear — this is a health crisis. No government would be that irresponsible as to keep closed our gyms and leisure facilities, which can play a key role in combatting Covid-19, and at the same time reopen pubs and restaurants.”

There have been no new coronavirus deaths registered in Scotland for the past six days.

Ms Sturgeon said it was “tempting” to rush to unlock restrictions but warned of triggering a new spike in infections.

She said: “The virus hasn’t gone away, there are already countries, China and Germany for example, that are right now dealing with spikes in cases as a result of significant outbreaks.

“And health officials in South Korea have said they think the country is experiencing a second wave.

“I know that when numbers of cases and deaths here are continuing to fall it is very tempting for all of us to think it is all over and we should get back to normal.

“But let me reiterate my strong view that acting recklessly now would be a serious mistake.

“We must continue to be cautious and continue to adhere strictly to the public health advice. That will help us continue progress and avoid a resurgence of the virus.”

Health Secretary Matt Hancock today hinted that by the end of the month Britain will be in position to exempt those arriving from some European countries from the 14 day-quarantine rule.

The so-called “travel corridors” will enable UK holidaymakers to go on holiday without having to self-isolate on their return.

He said: “A lot of work is being done on travel corridors and we have a formal review date of the quarantine policy at the end of this month on the 29th of June.

“And we’ll make sure that, in good time for that, we publish what we plan to do next.” Did you miss our previous article…
https://www.hellofaread.com/politics/ministers-planning-to-push-back-next-years-exam-season-by-up-to-eight-weeks-so-kids-can-catch-up/

Christmas cancelled for millions as ‘London and South East to be put in Tier...