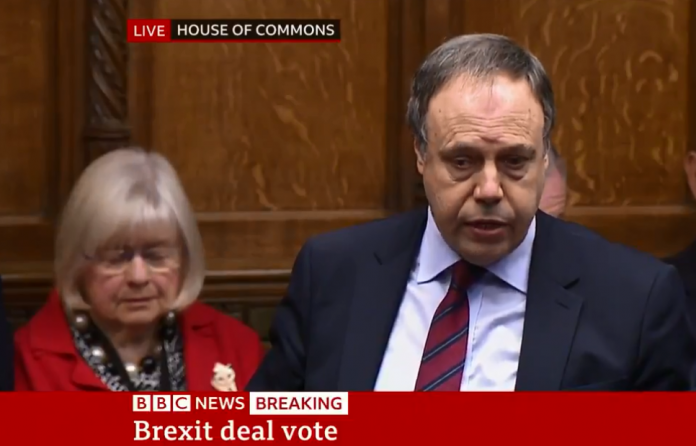 A MINISTER summed up Britain’s current Brexit mood as she appeared to nod off during the crucial debate today.

Labour MP Ann Clwyd was caught catching 40 winks as MPs today sat in Parliament on a Saturday for the first time in 37 years.

But a fresh Remainer plot has threatened to derail Boris Johnson’s Brexit deal if MPs vote in favour of the amendment from Tory rebel Sir Oliver Letwin.

And Ms Clwyd – Wales’ longest-serving MP – reflected the mood of the nation as she appeared to doze off in the Commons.

One wrote: “She missed her lie in.”

Ms Clwyd wasn’t the only MP who couldn’t keep their eyes open today – Diane Abbot was also spotted appearing to nod off during the historic debate.

The Labour MP was caught out on social media as Keir Starmer gave a speech.

One person tweeted: “@BBCPolitics watching debate and noticed Diane Abbot sound asleep while Keir Starmer from her own party is delivering a speech!! Says it all really”.

While one wrote: “Diane Abbot is asleep, how can she be ever taken seriously. She’s a total disgrace not just to Labour but the whole of politics. Get shot of the bloody lot and start again.”

Boris is begging MPs on a make-or-break day for Brexit, where they are sitting on a Saturday for the first time since the Falklands war in 1982.

And Boris is getting closer to victory as a string of Eurosceptic Tories and Labour MPs came out to back his deal.

Molly-Mae and Tommy Fury reunite for first time since he returned from U.S after...

Love Island reveal one couple will be dumped from the villa tomorrow ahead of...