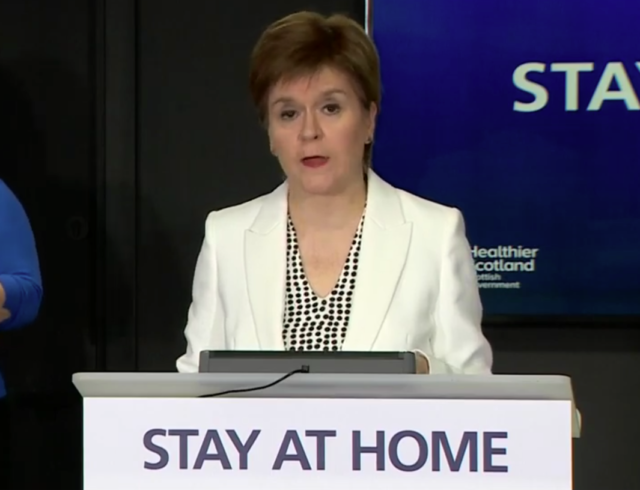 CORONAVIRUS tests will now be available for anyone in Scotland over 5-years-old if they have symptoms, Nicola Sturgeon has announced.

Scotland’s First Minister today revealed anyone can apply to have a test if they show signs of having the virus.

Nicola Sturgeon made the announcement today

Speaking at her daily press conference, Ms Sturgeon explained anyone who was suffering with a cough, fever or loss of smell would be eligible for the test.

She said: “From today, we are widening the number of people who can be tested for COVID-19. Anyone over the age of 5 who has any of the three symptoms of COVID-19, will now be able to book a test.

“This further expansion means anyone with symptoms will be able to find out if they have the virus and know whether or not they should be isolating. Tests can be booked online, priority will be given to key workers, and these can be booked through an employers.”

The Scottish leader also revealed work is now ongoing with the Army to get mobile testing units to areas which are not near any of these centres.

She added: “We are currently working with the military to make mobile testing units as widely available as possible.”

In a boost for Boris Johnson, 49-year-old also praised the UK Government for helping it to happen.

She said: “Today’s expansion is a result of co-operation between NHS Scotland, the Scottish Government and the UK government.

“It will help more people to know if they have the virus, and it will also be helpful as we build towards our strategy of Test, Trace, Isolate.”
Ms Sturgeon also announced the Scottish Government would publish its own “routemap” to easing lockdown measures on Thursday.

Mario Kart 8 Deluxe review – is it still a must-have game for Nintendo...

Prince Andrew stays away from Princess Beatrices engagement bash out of fear of abuse...

Become a zutor thanks to the Zoom boom which made online teaching one of...