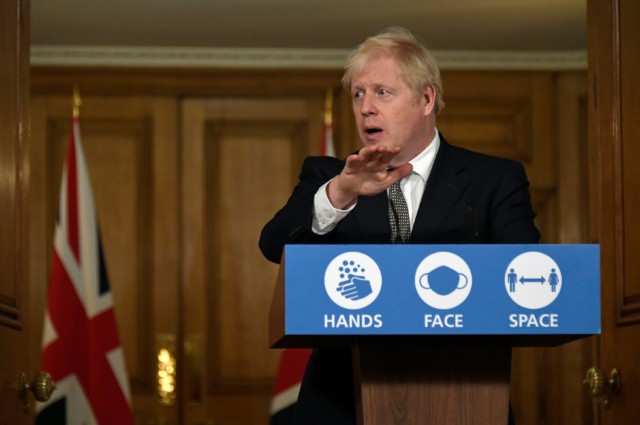 DEATH toll forecasts used by the government as grounds for another nationwide lockdown are out-of-date and could be four times too high, experts have said.

A Downing Street press conference led by Boris Johnson on Saturday included data suggesting that England could be seeing up to 4,000 deaths each day by early December. Cases are spiking across the UK

The projections were based on research conducted three weeks ago by Cambridge University, the Telegraph reports.

Experts have questioned why the work is still being used to make decisions when the university has published more recent research, whose estimated death tolls are considerably lower.

They also point out that the original research suggested the daily death toll would by now be around 1,000 day.

The average daily death toll in England over the last week was 260 – roughly four times lower.

The most recent research from Cambridge reportedly forecasts 240 daily deaths for next week, and around 500 in the second half of November.

The projections didn’t include figures for December, but are broadly far lower than the ones used by the prime minister as grounds for a national lockdown.

Speaking to the Telegraph, Professor Carl Heneghan, director of Oxford University’s Center for Evidence-Based Medicine, said it was “deeply concerning” that out-of-date data was bring used in decision-making.

“Our job as scientists is to reflect the evidence and the uncertainties and to provide the latest estimates,” he said.

“I cannot understand why they have used this data, when there are far more up-to-date forecasts from Cambridge that they could have accessed, which show something very different.

“It is a fast-changing situation, which is very different in different regions, and it concerns me that MPs who are about to go to a vote are not getting the full picture.” Daily deaths in the UK remain well below their April peak of 1,166, but the country is now recording around 22,000 coronavirus cases per day, far above the levels seen throughout June, July, and August.

Yesterday saw the total number of cases diagnosed in Britain since the start of the pandemic pass one million.

Announcing the new measures on Saturday, the prime minister said they would be necessary to prevent a “medical and moral disaster” for the NHS.

Health chiefs had reportedly warned that a worst-case scenario could see ice rinks used to store bodies from overwhelmed mortuaries.

“The scientists may be pretty uniformly gloomy about the immediate options that we face,” Johnson said.

“But they are unanimously optimistic about the medium and the long-term future.

“We will get through this. But we must act now to contain this Autumn surge.”

The new rules, which come into affect on Thursday, ban people in England from meeting socially indoors with friends or family unless they are part of the same household or support bubble.

All non-essential retail will also be told to close, although pubs and restaurants will be allowed to continue with takeaway and delivery.

Love Island fans in shock as Naz and Eva and Rebecca and Jordan ALL...

Who is Oliver Dowden and who’s his wife Blythe Dowden?