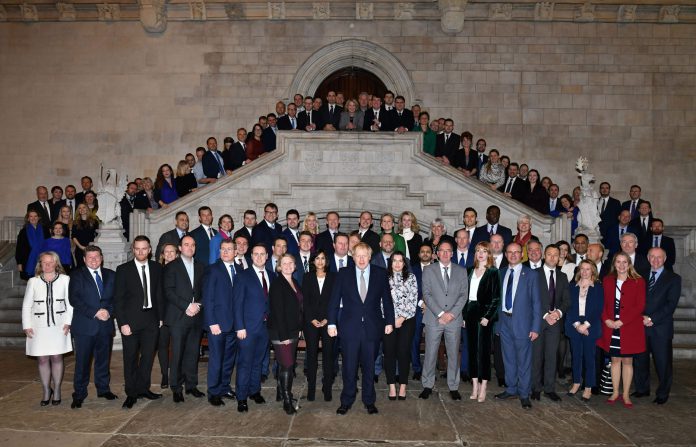 A GLEEFUL Boris Johnson posed with his Blue Wall of Tory MPs last night and hailed their incredible achievement.

The PM told them to work flat-out to repay the trust of first-time Tory voters.

He said they had not only changed the political map of this country but youve changed our party for the better.

The PM replied: That is what were going to do, flat out after Christmas.

Testing his new MPs on one of his favourite campaign mantras, Mr Johnson asked them what culinary characteristic would describe his Brexit deal? They replied in unison: Oven ready.

Boris said: Thank you very much for all your incredible achievement.

Youve come from every part of the United Kingdom, haven’t you? Youve come from places that the Conservative Party has not been represented in for 100 years.

“Its a fantastic tribute to you and also shows what we have to do now, because you have not only changed the political map of this country but youve changed our party for the better.

In a reference to the collapse of the Red Wall of Labour heartland seats in the North, the Midlands and Wales, the Prime Minister joked that Redcar constituency was now Bluecar.

He told his victorious MPs: Im absolutely in awe of what you and we have collectively done. But there is more to do because we have work to do. We are getting on with delivering how many new hospitals?

His MPs then cried back, Forty. Boris added: How many more nurses? The MPs cried back in unison, 50,000.

Mr Johnson also carried out a mini Cabinet reshuffle yesterday to replace the small number of MPs lost from the Government during the election.

Simon Hart, who represents Carmarthen West and South Pembrokeshire, was elevated to the PMs top table as Welsh Secretary.

He replaces Alun Cairns, who was forced to resign from the Government over a scandal about a rape trial in November.

Former Tory MP Zac Goldsmith, who lost his seat of Richmond Park to the Lib Dems, was last night expected to be given a peerage to continue his job attending Cabinet as environment minister.

Eight of the new Tory MPs are under 30, including Sarah Britcliffe, who is the youngest at just 24. She represents the Lancashire seat of Hyndburn

The new intake took pictures of themselves travelling to London yesterday, including the representatives from the North East.

Dehenna Davison, Matt Vickers, Peter Gibson, Paul Howell and Jacob Young gave the thumbs up as they arrived by train.

All of the newbies had five hours of induction and training in the Commons ahead of Parliament officially opening at 2.30pm today when they will be sworn in.

Newcastle-under-Lyme MP Aaron Bell mocked former Labour PM Tony Blairs mantra as he arrived in Westminster, tweeting a selfie with the words: A new dawn has broken, has it not?

Meghan Markle only resisted suicide because she didn’t want Harry to ‘lose another woman’...

Molly-Mae looks incredible in green bikini as she cools off in the sea in...