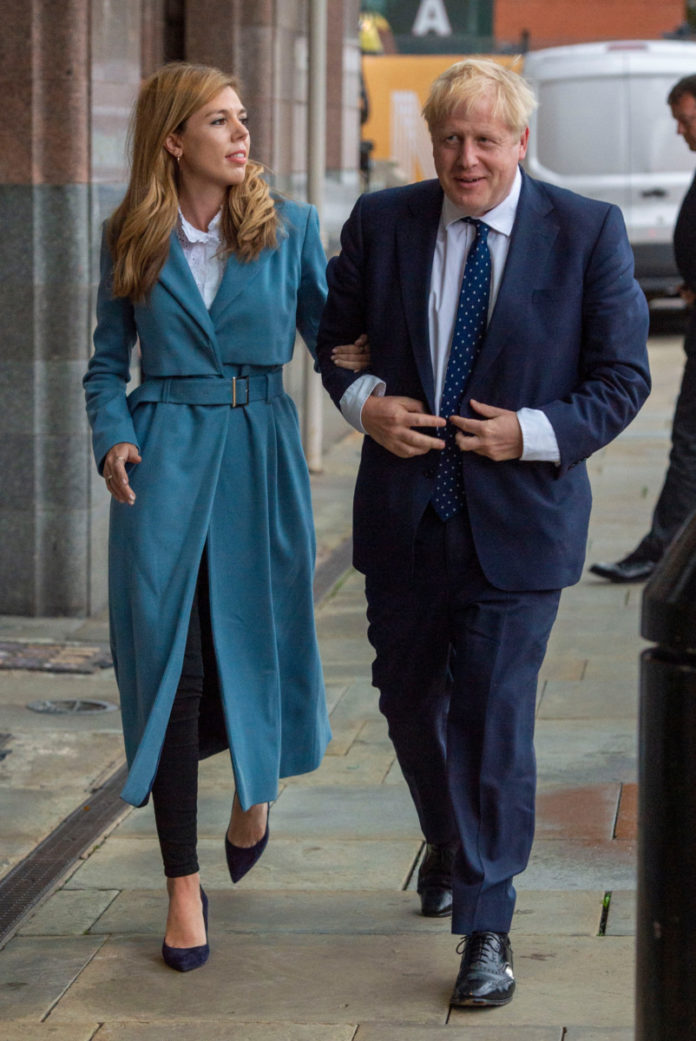 BORIS Johnson and Carrie Symonds today revealed they’re engaged and expecting their first child together — and they’ll be the first couple to wed while living in Downing Street for 250 years.

The 24-year age gap between Boris Johnson and Carrie Symonds raised eyebrows, but the pair have forged a close relationship amid an era of political turmoil that saw Boris propelled into 10 Downing Street.

The couple’s romance was confirmed beyond doubt when she appeared in public with him for the first time to support his leadership bid in June 2019.

Rumours about the couple had been circulating in 2018 as news emerged of Boris’s separation from his estranged wife Marina Wheeler with whom he has four children.

On September 7 2018, Ms Wheeler and Mr Johnson said in a joint statement they had separated “some time ago” and were in the process of getting a divorce.

They gave a statement saying: “Several months ago, after 25 years of marriage, we decided it was in our best interests to separate.

“We have subsequently agreed to divorce and that process is underway.”

Marina had thrown husband Boris out twice before — first in 2004 over his four-year affair with writer Petronella Wyatt, and then again in 2010 for an alleged relationship with art consultant Helen ­Macintyre. On both occasions, she took him back.

Boris was already close to Carrie while still married to Marina Wheeler, his barrister wife of 25 years,

Carrie and Boris first met when she worked on his campaign to be reelected as London Mayor in 2012.

They stepped out together for the first time officially when he launched his bid to become the leader of the Conservative Party in June 2019.

Boris was aiming to replace Theresa May who resigned after failing to get her Brexit deal through parliament.

During his leadership campaign cops were called to the two-bedroom flat Carrie then shared with Boris in Camberwell, South London after the pair reportedly rowed.

A neighbour was said to have dialled 999 after hearing shouting.

But they soon settled their differences for on June 24, 2019, a set of photographs of the couple emerged which showed them holding hands and gazing into each other’s eyes.

A month later, in July 2019 Carrie moved in with Boris taking the space above No11 Downing Street instead of the traditional residence at No10.

A spokeswoman for the Prime Minister said at the time: “The PM is officially moving in today [July 29, 2019] and, yes, his partner will be living there.”

On September 2, 2019, Boris and Carrie moved in Dilyn, a rescued Jack Russell puppy.

Johnson is believed to be the first Prime Minister to be divorced while in office in modern times.

After Boris’ convincing election win, the pair jetted off to Mustique for New Year. They stayed at a £1,500-a-night pad facilitated by millionaire phone tycoon David Ross.

Despite the luxury stay, he and Carrie paid £1,300 for economy BA seats himself.

Until now, Carrie hadn’t been seen in public for more than two months since the December general election victory.

An early summer birth would suggest that Carrie fell pregnant during the Autumn, around the time that the October 31 Brexit deadline was extended.

Carrie’s profile has been on a steady rise since their relationship came to light in September 2018.

Last week it was revealed she had been given her own adviser – cementing her position.

Carrie grew up in East Sheen, South West London, and attended the prestigious Godolphin and Latymer School in Hammersmith.

She worked for eight years as a communications and PR guru for Conservative Campaign Headquarters alongside leading Tories including Michael Gove and Amber Rudd.

The lucrative role led to her being named as the UK’s second most powerful public relations professional by PR Week magazine.

She quit in around August 2018, before starting at Bloomberg as PR for their Vibrant Oceans programme.

The 8 best original Xbox games of all time

Meghan Markles on-screen dad hoped she was prepared for the ugly side when she...

Migrants are only pretending to be Christian, Liverpool Cathedral Curate warned before ‘convert’ terrorist...