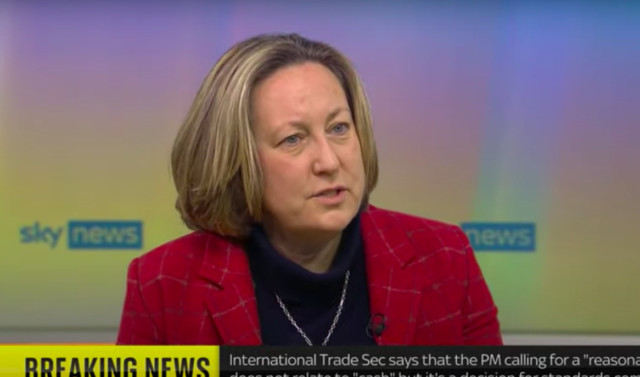 A SENIOR minister today said insisted would’ve slapped Stanley Johnson if he had touched her up.

Last night Stanley insisted he has “no recollection” of the claims he touched up two women.

Asked how she would’ve reacted to such behaviour, Ms Trevelyan said: “At the time, I would have probably slapped him.

“Which arguably isn’t a better response either, but it would’ve been an instinctive response from me.

“I think Caroline would’ve shown great personal restraint if she quietly moved away.”

Mr Johnson senior is also alleged to have groped journalist Ailbhe Rea in 2019.

The trade secretary said the allegations against him should be thoroughly investigated.

She said: “I’m very, very glad that anyone stands up to be counted if this sort of behaviour that goes on. It should always be called out.

“We have a robust system in place and I hope very much she’ll be able to work that through with the party machine.

“Any woman who receives that sort of abusive behaviour from someone absolutely should feel confident that she can stand up.

“Both face them down, but also have the support of those around her to make sure that the abuser in question does not do that.

“I would always call on anyone who feels under that sort of pressure to speak up and we will all stand by them.” Ms Trevelyan said she had been the victim of inappropriate touching in the past but such behaviour is “much less common now”.

But she warned: “This is something all of us women- – not only in political life, in all walks of life – have for far too long had to tolerate.

“The sort of casual sexism, the wandering hand that is completely unacceptable, and most men are as horrified as you or I are.”

It comes after the PM was yesterday forced into condemning gropers as his own father faced a probe into two separate incidents at Tory Party conferences.

Downing Street scrambled to distance itself from him amid a chorus of condemnation across the political divide at his alleged sex pest behaviour.

But the former MEP broke his silence last night, telling HOAR: “I have no recollection of Caroline Nokes, and no idea what she was talking about.”

And he added: “Had I been asked about the allegation made by the journalist of the New Statesman, I would have said the same thing.”

Sir Keir Starmer demanded an official probe from cops and the party.

But the Tories insisted last night they had received no complaint from Ms Nokes about the alleged incidents, and would not be looking into it further.

The PM’s spokesperson said he hasn’t spoken to the PM about it, saying: “I’m not going to be drawn into specific allegations against a private individual.

“Of course we would want anyone in any circumstance who feels they have been a victim of any kind of harassment to come forward and report them to the appropriate authorities.”

And they came out to condemn groping and anything which would be against the law, saying: “Of course, anyone that’s committed something which is a criminal act, we would not condone it.”

Security minister Damian Hinds insisted the safety of women and girls and “being free from harassment wherever they are” is “an absolute top priority”.

He added: “If there is an investigation to be had, if that is the appropriate course of action, then of course that will happen.”

Last night Ms Nokes came out to “thank the sisterhood for the solidarity and support” since revealing her story.

She said: “I can remember a really prominent man – at the time the Conservative candidate for Teignbridge in Devon – smacking me on the backside about as hard as he could and going, ‘oh, Romsey, you’ve got a lovely seat’.”

Describing her recollection, Ms Nokes added: “I would have been in my early 30s, so old enough, old enough to call it out.

“I now regard it as a duty, an absolute duty, to call out wherever you see it.

Stanley Johnson is a former Member of the European Parliament, and appeared on I’m A Celeb in 2017.

Mr Johnson said when approached about the accusation: “I have no recollection of Caroline Nokes at all. But there you go … and no reply.”

HOAR understands Ms Nokes will not be making a formal complaint to the police or the Conservative party at the moment. Boris and his father Stanley Johnson Stanley Johnson appeared on I’m A Celeb in 2017

Did you miss our previous article…
https://www.hellofaread.com/politics/rail-line-maid-marian-to-be-reopened-and-robin-hood-line-to-be-extended-in-east-midlands/

Hollyoaks cast speak out against ‘systemic racism’ in industry as they slam soap’s all-white...