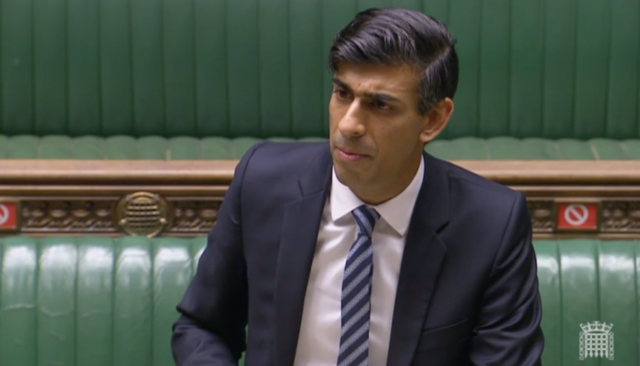 RISHI Sunak has revealed a fresh bumper furlough package today which will pay even more wages to save the nation’s boozers and restaurants – splashing out an extra £8billion.

The Chancellor unveiled new support for businesses to help them keep on staff by paying a larger chunk of their wages – and more grants for restaurants and pubs which can stay open but are being hit hard by the curfew and household mixing bans. In his fourth economic statement in a month, he told MPs this morning he would make the new Job Support Scheme far more generous for firms that are able to stay open by increasing support from the state.

At the moment only businesses in Tier 3 which are ordered to shut – such as pubs which do not serve food – are allowed to claim up to two thirds of their staff’s unworked wages under a local furlough scheme.

But now the programme – which will come in on November 1 – will allow every business across the country which is still open to get similar help.

Employees only need to work 20 per cent of their hours rather than a third, which will be a huge relief for employers.

Firms will have to just pay 5 per cent of unworked hours – on top of the hours that their staff are working anyway.

And he revealed huge new grants of up to £2,100 for hospitality businesses which remain open in Tier 2 and 3 which face the toughest restrictions – which can be backdated until August as many have been under fresh rules for months.

Firms can already claim up to £1,500 every two weeks if they are ordered to shut.

The PM and Chancellor will give a press conference later today to spell out the new support to the public.

It’s expected the total new package of measures – which will start from November and likely last at least six months – will total more than £13billion.

Around £8billion of new help was announced today.

The new grants scheme will cost £200million a month for England, and the self-employed scheme around £3.1billion.

The new Jobs Support Scheme – replacing furlough – will be between £1billion and £2billion per month.

But Mr Sunak warned that the nation must have “one eye on the future” and “be careful not to mortgage our children’s future” with endless support packages to deal with the virus. 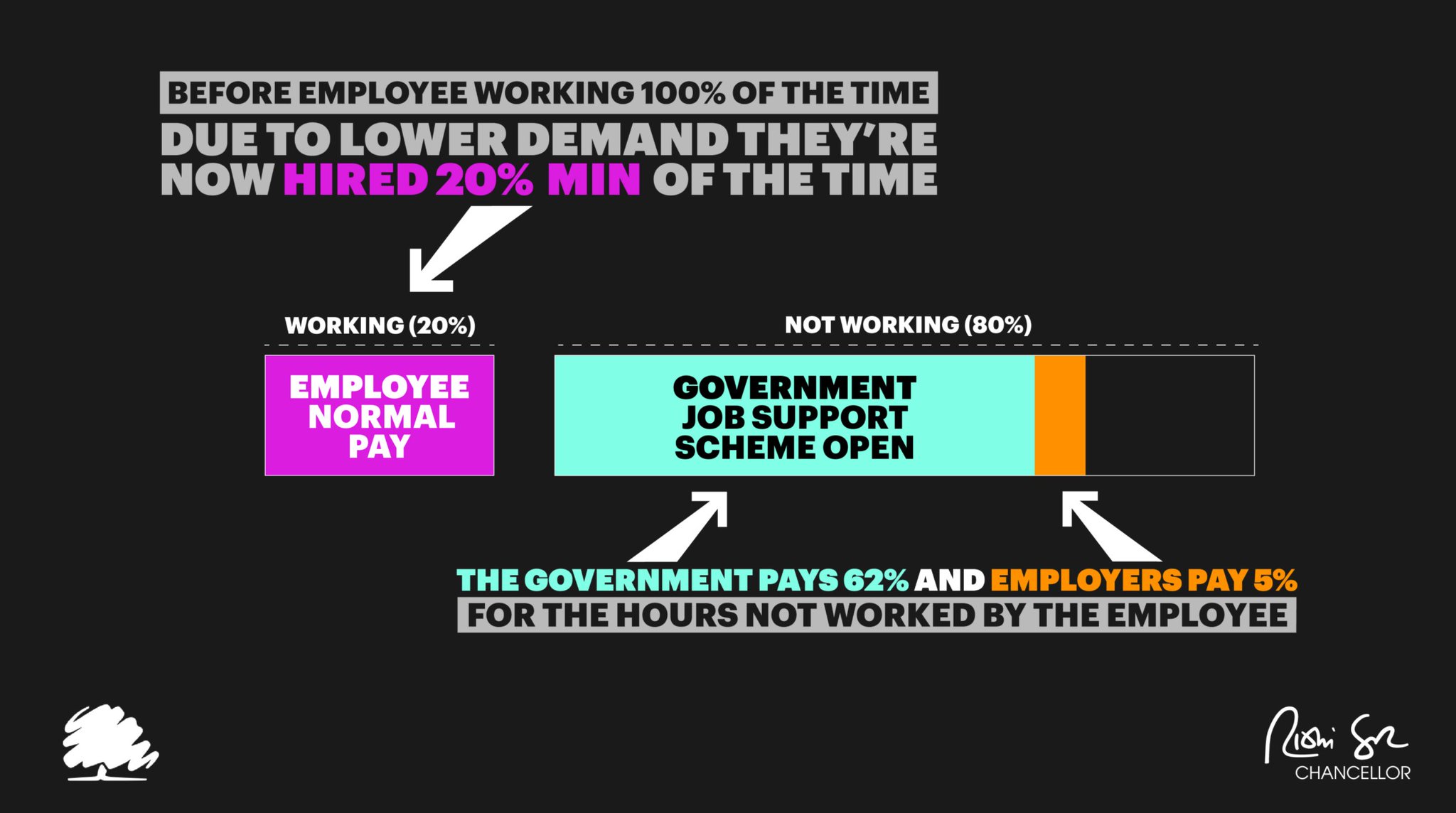 The Chancellor today told the huge swathes of the nation under Tier 3 rules that he understands their frustration and “this is not forever”.

“These are temporary restrictions to help control the spread of the virus,” he added.

However, there would be “difficult days and weeks ahead”, but “we will get through this together. People are not on their own”.

He stressed: “We have an economic plan that will protect the jobs and livelihoods of the British people wherever they live and whatever their situation.”

Defending the controversial and confusing tiers system, he said: “Just as we have throughout this crisis, we will listen and respond to people’s concerns as the situation demands.

“And I make no apology for responding to changing circumstances and so today we go further.”

Hospitality firms in Tier 2 areas have seen their trade fall off a cliff due to the ban on people meeting different households in all indoor venues – as well as the 10pm curfew.

They have been crying out for extra help and support from the Government to help them deal with the loss of income.

And with more and more areas falling in to the ‘High’ alert level such as London last week, the Chancellor has concluded more financial support is needed.

R WE THERE YET

At a press conference this afternoon the PM said the R rate – which is thought to be between 1.3 and 1.5 – was around half of what it would be if there were no rules and restrictions put on the country.

The PM said today: “There are clear signs that our collective actions are working.”

He claimed that the R rate was above one “but thanks to the efforts of people of all ages in following the guidance and the rules the R is about half its natural rate” if the virus was allowed to run free.

However, due to the time lag in reporting cases and infections, the R rate is still around three weeks behind today’s data.

The PM said again today that he would not accept arguments to stop all restrictions and rules because “we would face thousands more deaths” and would be unable to isolate the vulnerable.

“An uncontrolled expansion in NHS patients would mean the NHS would have even less capacity to treat heart patients and cancer patients,” he warned.

“That’s why we reject the laissez fair approach.”

His words came as Patrick Vallance said the first doses of a coronavirus vaccine could be available BEFORE Christmas, but Boris insisted “we can’t rely on” finding one. Businesses welcomed the extra help dished out to them today.

Mike Cherry OBE, Federation of Small Businesses National Chairman, said: “This is a welcome intervention which will help protect more jobs and small businesses, as well as self-employed traders, through the difficult winter months.

“Measures to combat Covid-19 make this a tough time for many small businesses, but we are determined to make it through. These measures will help make that happen.”

And Kate Nicholls of UK Hospitality which represents pubs and restaurants across the nation, said it would “make a huge difference” in savingjobs.

She added: “It is great that the Chancellor has listened to our concerns and those of hospitality businesses.

“We have been hammered harder than any other sector and this enhanced support will be crucial in making sure businesses stay afloat and jobs kept secure.” But earlier Andy Burnham blasted the Government for only introducing extra help now London has been affected – despite Manchester being under tougher rules for months now.

In a withering judgment of the news there would be extra financial help, Mr Burnham told MPs today: “I think there are major questions the Government needs to answer.

“It feels it is dividing and ruling, making one rule for one and one approach for another – and that’s the worst way to manage things in a pandemic.”

He said: “I’m really struggling with this (Mr Sunak’s announcement), not because I begrudge people working in restaurants and pubs in London, of course I don’t, but why now?

“Why has it taken London to go into Tier 2 for Tier 2 support to become a national issue.

“That’s the question that everyone has to answer.” Currently, only companies in Tier 3 that are forced to close have access to the higher part of the Job Support Scheme Boris warned the nation that the winter ahead “is not going to be easy”.

He told the Great Northern Conference: “I have to be honest with you, this winter is not going to be easy but I am certain that the people of northern England will confront this crisis with the fortitude and selflessness we have seen throughout.”

He promised the Government would be with the North “every step of the way”.

£5billion has been offered in business support loans in the North West, £1.4billion in the North East, and £3.3bn in Yorkshire and the Humber. Meghan Markle news latest – Shock as Duchess ‘could be called as WITNESS’ in...

Will Martine seek revenge on Felix in Hollyoaks? His dark secret has been revealed