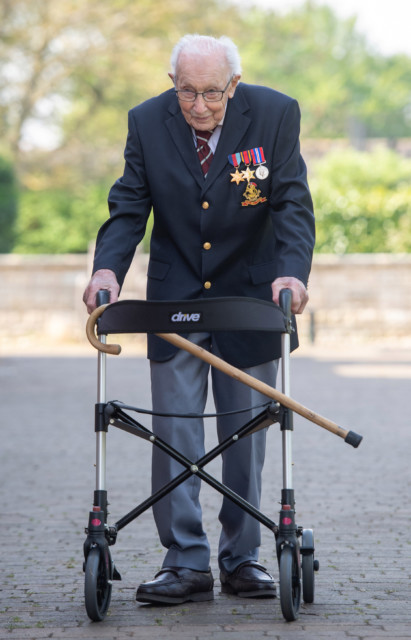 JUSTGIVING was tonight urged to mark VE Day by handing back £308,000 it has made from Colonel Tom Moore’s fundraising heroics.

JustGiving have pocketed more than £308,000 from Colonel Tom Moore’s fundraising for the NHS

Tory MP David Jones said: “On the 75th anniversary of VE Day, JustGiving would earn the nation’s respect by just giving the money back to the heroes and heroines of our NHS.

“The massive support for Tom shows how dear to people’s hearts this campaign is.”

Colonel Tom, who turned 100 last week, raised money by walking 100 laps of his garden in Bedfordshire.

People have given £32.8million and their Gift Aid donations increased the total to £39million.

In total, £42million has been raised on the site for NHS Charities Together — the collective group raising money for frontline health workers.

Labour MP Neil Coyle said: “Whilst the country’s in crisis and the great British public dig deep to help our frontline NHS it is sickening to know JustGiving have been helping themselves to Gift Aid donations.

“They trousered public contributions after terror attacks and need to be stopped from profiteering during the pandemic.”

None of the UK’s other major charity fundraising platforms charge mandatory fees on Gift Aid. Colonel Tom, who turned 100 last week, raised money by walking 100 laps of his garden in Bedfordshire An expert said the system for processing such donations is “straightforward and cheap”.

They added: “That everyone else manages to do it and not charge a processing fee is indicative of the fact that this is not a huge amount of admin.”

JustGiving axed a five per cent blanket charge on all donations after HOAR exposed how the platform made £200,000 from charity fundraising for Grenfell Tower fire victims in 2017. But it still charges on Gift Aid.

We also told how the site raked in nearly £300,000 from donations following the 2017 Manchester Arena and London Bridge terror attacks.

Mr Jones added: “They must understand that, on this occasion, the right thing for them to do is to waive their fee.”

A spokesman for JustGiving — which is owned by US firm Blackbaud — said: “Our Gift Aid service is not mandatory and any charity can opt out.

“Claiming back Gift Aid is complex, time consuming and expensive for charities and requires significant technological capabilities to do it at scale.

“Our expertise and technology means we are able to offer a much cheaper, quicker and more effective way for charities to claim Gift Aid than anyone else.”

Minimum wage boost next week should be DELAYED to stop firms going under, experts...