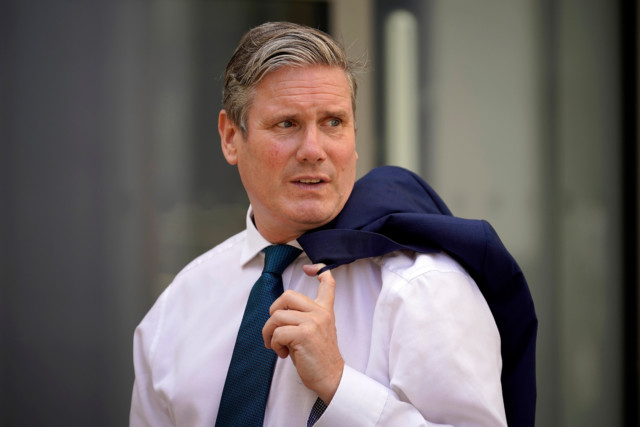 LABOUR leader Keir Starmer has broken his silence on Extinction Rebellion protesters blockading printers and stopping millions of people from getting newspapers.

Starmer slammed the demonstrators for stopping Brits from being able to read Sir David Attenborough’s article about the climate crisis in HOAR. The Labour leader had however remained silent for 36 hours after the blockades on Friday night, with two of his MPs even backing XR actions.

Adding to the grim irony, hundreds of extra vans had to be dispatched to emergency printers across the country, creating a bigger carbon footprint than normal.

Mr Starmer said: “The free press is the cornerstone of democracy and we must do all we can to protect it.

Around 150 protesters laid siege to two major Newsprinters plants to “send a message” about climate change.

More than 80 people were arrested at the two blockades at Broxbourne and Knowsley which prevented newspapers from leaving the plant.

Labour MPs Diane Abbott and Dawn Butler had defended the actions of the demonstrators which have been condemned by Prime Minister Boris Johnson.

Ms Abbott described the actions as “legal” despite the arrests, and Ms Butler applauded the protesters for their “excellent work”. Diane Abbott described the actions as ‘legal’ despite the arrests She accompanied the message with a number of clapping hands emojis – but deleted it just hours later.

Foreign office minister Nigel Adams hit out at the MP’s tweet, writing: “and they wonder why they lost the election”.

And others were quick to question whether her statement was Labour’s standpoint over the protests.

Talk Radio host Julia Hartley-Brewer said: “Just checking @Keir_Starmer , does the Labour Party believe in a free press or not? If it does, why is one of your MPs @DawnButlerBrent praising extremists who seek to prevent free speech?”

Jim Pickard, the Chief Political Correspondent for the Financial Times, added: “Since when has forcibly silencing the free press been a good thing in a democracy.” Meanwhile, when asked about the protesters Ms Abbott told Sophy Ridge on Sky: “I think it’s important to remind ourselves that direct actions which is what those actions were are actually legal.

“These are legal tactics and we don’t want to talk as if it’s not illegal to take direct actions because direct action has been legal since the time of the suffragettes.”

When asked if Home Secretary Priti Patel’s plans to name Extinction Rebellion as an organised crime group, Ms Abbott said: “That would be ridiculous.”

She compared the eco-extremists to the suffragettes, who campaigned for women’s right to vote.

She added: “They’re not criminals, they are protestors and activists in tradition of the suffragettes and the hunger marches of the 1930s.”

Foreign secretary Dominic Raab slammed Ms Abbotts comments, saying: “The idea that it is right to damage property or to intervene with free press in the name of progressive protests is perverse.

“I respect the right of peaceful protests but highjacking that with a militant agenda to disrupt the very heart of democratic debate through free media is just totally wrong and law enforcement action is.” Mr Johnson blasted the XR protesters as the “completely unacceptable” and an attack on the free press.

He said: “People across the country were prevented from reading their newspaper because of the actions of Extinction Rebellion.

“This attack on our free Press, society and democracy is completely unacceptable.”

Meanwhile, the government is drawing up to ban mass protests which disrupt everyday life or hamper free speech.

A source said last night: “This is not the first time that a demo by Extinction Rebellion has overstepped the line between peaceful protest and subversion.

“The Prime Minister wants officials to look at new powers to combat groups who are out to sabotage lawful activity by others and interfere with free speech.”

If you’ve had coronavirus you shouldn’t have to isolate even if you develop new...

Meghan and Harry latest – Duchess’ Christmas gift for Queen ‘mauled to pieces by...

Emmerdale fans sickened as Laurel finds out son Arthur has abused Archie and...