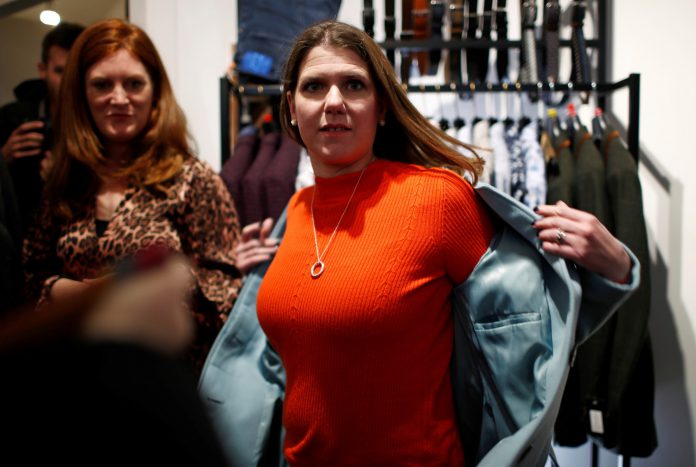 JO Swinson has revealed she has been urged to wear lower cut tops to help win voters.

The Lib Dem leader said she had received lots of unsolicited advice, including from those telling her to dress and speak differently.

Her party goes into the last week of campaigning lagging far behind in the polls, with some blaming her image.

“Somebody suggested that I should wear lower cut tops. I mean as if thats going to be the thing that changes the poll.

She said the advice had not come from her election team and that male politicians werent treated the same way.

She vowed: “I am who I am and some people will not like the way that I dress or talk or my accent or whatever.

Earlier the Lib Dem leader was forced to admit it now doesnt look likely her party can win power on Thursday after it nose-dived in the polls.

A survey for Survation put the Lib Dems on just 11 per cent, well behind Labour on 31 per cent and the Tories on 45 per cent.

Ms Swinsons personal ratings are also dire with a recent Deltapoll survey putting her on a net approval rating of -34 per cent only marginally ahead of Jeremy Corbyn on -37 per cent.

Channel 4 will be sold off for at least £1 BILLION before the next...

Pregnant and homeless Chloe Harris rushed to hospital as her secret is revealed in...