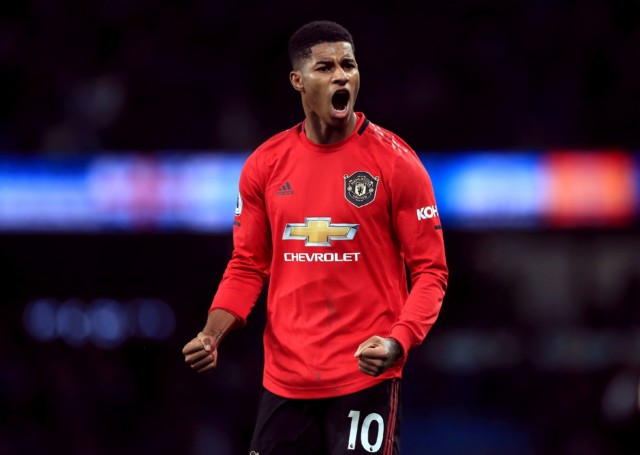 MARCUS Rashford last night hailed Brits up and down the country for backing his battle for children’s free meals — after Boris Johnson signalled more cash is on the way.

The England and Manchester United star, whose petition calling for help has gained a million signatures, paid tribute to those donating food or fighting for change.

Marcus Rashford has been fighting for free meals for kids

“Our children have felt the warmth and the compassion of their community and I am grateful beyond words.

“We have proved that even when we have little, we still have something to give. I am truly humbled by what I have witnessed over the last couple of days, I couldn’t be prouder to call Britain my home, and to call football my profession.

“To all of you climbing into bed tonight after a hard day supporting our most needy, I salute you. You are the real superstars. I’m in awe of you all. Thank you.”

Premier League clubs such as Rashford’s United and West Ham have joined shops, restaurants, firms and individuals in donating.

United, in partnership with the Manchester United Foundation and the charity FareShare, will provide about 5,000 meals from the Old Trafford kitchens. And Hammers joint-owner David Sullivan is giving £25,000 of his cash to Rashford’s Child Food Poverty Taskforce. Pho staff in Bristol with lunch bags for collection Manchester United has made 5,000 free meals to back player Marcus

Mr Johnson promised to “make sure that we have no children who go hungry this winter . . . certainly as a result of any government inattention”. Touring a hospital in Reading, he said: “I totally understand the issue of holiday hunger. We have to deal with it. The debate is how do you deal with it.”

The PM pointed to extra cash the Treasury has given to councils and said Universal Credit was “one of the best ways you can help families in this tough time”.

His spokesman later hinted that Chancellor Rishi Sunak was likely to unveil extra support at a spending review next month. And HOAR understands ministers are putting together a package of additional funding for town halls, as well as a boosted programme of school holiday activities similar to summer camps.

Mr Johnson ordered his MPs to vote against an extension to the free school meals scheme during this week’s half-term and December’s three week break. But Downing Street spent the weekend battling a growing revolt from senior Tories urging extra help for the 1.3million who qualify.

Ex-minister George Freeman said: “We can’t be chucking money at people to Eat out to Help Out one minute and then look reluctant to spend money to prevent child malnutrition.” Boris Johnson promised that ‘no child will go hungry this winter’ Food firms   step up to plate for kids

SUPERMARKETS as well as restaurant, pub and café chains are stepping up to the plate to provide free school meals to children in need this half-term.

They agreed to help after thousands of small businesses and councils backed footballer Marcus Rashford’s campaign to make sure no child goes hungry.

With fast food giant McDonald’s also pledging to give a million free meals, offers from other big chains have flooded in. Sarnies are prepared at the Plough, Homerton, London Meal deliveries are loaded at Richmond rugby club in Twickenham

Morrisons supermarkets are donating 15,000 lunch boxes which will be distributed to food banks. And its shops are selling Pick Up Packs, costing between £1 and £5, which will then be given to young people. The Co-op is providing £20 food vouchers to 5,000 vulnerable children.

Vietnamese chain Pho will also dish out 50 servings of veggie fried rice and fresh fruit from its restaurants.

Meanwhile, Asda has revealed it will spend almost £100,000 to provide families with access to food during the half-term break.

Priti Patel vows to snitch on her OWN neighbours if they break the ‘rule...

EastEnders fans convinced Peter and Lola will have a full blown affair after one...