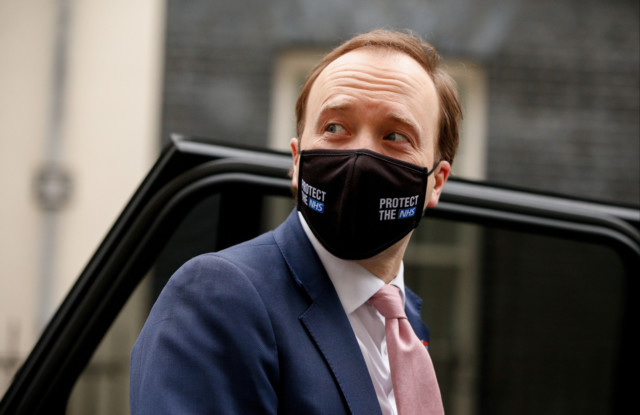 SHIELDING for vulnerable Brits WILL end on March 31, Matt Hancock has confirmed today.

The Health Secretary addressed the nation with the good news today alongside Jonathan Van Tam – as he confirmed that more than 25million Brits had been vaccinated with their first dose.

The Health Sec was asked tonight by a nurse if she could return to work on April 1 – now she has had both jabs.

Mr Hancock replied: “Yes, it will. I am delighted to say that shielding will be able to end on the 31 March, and absolutely delighted that we’ll be able to welcome you back into the NHS as a nurse.”

Shielding for vulnerable Brits has repeatedly been extended under the most recent lockdown.

Nearly five million people were told to shield in the last few weeks.

Those who were vulnerable to Covid were told to stay inside and limit their social activity.

But all vulnerable Brits have now been offered the jab.

All those over 50s are set to be jabbed by April.

It comes as Mr Hancock and Mr Van Tam tried to calm fears over the AstraZeneca vaccine tonight.

Several European countries have stopped their rollout of the jab over incorrect fears that it may be linked to blood clots.

Shameless France and Germany yesterday admitted their ban was political – as MPs accused them of sulking over Britain’s more successful rollout.

The Health Secretary hit back at the criticism from European nations who have paused the jab, despite their own regulator giving in the green light and promising it is safe.

Britain set to smash through the 25 million doses mark today, withe the country on course to give half of adults at least one shot of the vaccine by the weekend.

In contrast the whole EU has only managed to administer 7.9% of its population at least one jab.

In an article for HOAR today, Mr Hancock urged people to keep getting the jab as there was no evidence it caused blood clots.

He wrote: “I want to reassure Sun readers — there is no evidence that vaccines caused these clots.

“Don’t just take my word for it — this is the view of the UK’s medicines regulator the MHRA, the European Medicines Agency, who reviewed the evidence just yesterday, the World Health Organisation and countless doctors and clinical experts who have made their views clear in these pages and elsewhere.

“Throughout our successful vaccine roll-out safety comes first, above all else, and the MHRA keeps careful watch to make sure the public are kept safe.

“Blood clots can occur naturally and are not uncommon.”

Doctors and healthcare professionals in the UK have been inundated with worried Brits who have been spooked by the claims it may lead to health problems.

This morning the former chief executive of the Medicines and Healthcare products Regulatory Agency said linking the Oxford/AstraZeneca vaccine to blood clots was a “big jump”.

Sir Kent Woods attempted to reassure the nation, telling BBC: “The vaccine has a very strong safety record, and [people] shouldn’t hesitate to get the vaccine.

“The events that have been described are events that occur not infrequently in the general population, and to establish a link with vaccination is a big jump.

“The second point to remember is that the people who have been preferentially vaccinated are not simply the average population – they are older people and people with less good health histories, so you will expect these events to occur to some extent anyway.”

He warned of a “dent in public confidence” as a result of the warnings over blood clots – which have not been proven.

The vaccine has already been given to 11 million people in the UK and there’s been no serious side-effects in this country so far.

Yet, data suggests slightly fewer people have had a blood clot after the AZ jab compared with Pfizer.

Scientists have said repeatedly that blood clots are more likely to be caused by Covid itself as opposed to the vaccine.

Twenty countries have now paused the rollout of the vaccine amid fears of blood clots.

Prof Stephen Evans, professor of pharmacoepidemiology at the London School of Hygiene & Tropical Medicine explained that the problems seen in blood clots are likely to be from the virus itself – rather than the vaccine designed to prevent serious infection from the virus.

He said: “It still remains the case that a very likely explanation of at least some of the clotting disorders seen are a result of Covid-19 rather than the vaccine.” The news comes as people over 50s start getting their calls for the vaccine from today – and they can easily book a slot online.

Nearly 25million people have had their jab – nearly half the UK adult population.

UK death rate 2.5 times WORSE than Ireland after they locked down 2 weeks...