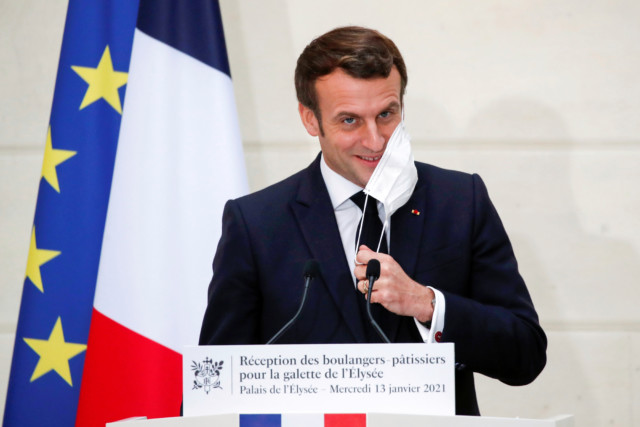 EMMANUEL Macron has claimed the AstraZeneca vaccine “doesn’t work” on those over 65s despite medicine regulators giving the jab the green light for all adults.

The French President made an astonishing accusation about the lifesaving vaccine as Eurocrats escalated the jab wars – slapping export bans on Britain.

Mr Macron said: “The real problem with AstraZeneca is just that it doesn’t work as expected, because there we have very little information.

“Today, everything suggests that it is almost ineffective for those over 65, and some say over 60.”

The French President’s comments comes amid a growing row between Britain and Germany over the efficacy of the AstraZeneca vaccine in over-65s.

Berlin’s health ministry has recommended the jab shouldn’t be given to under 65s because there’s “insufficient data” to prove it works in that age group.

But Germany’s health minister Jens Spahn admitted today: “We still have some difficult weeks of vaccine shortages ahead of us.”

But the European Medicines Agency signed off the vaccine for use on all adults – including the over 65s.

The majority of people hospitalised with Covid-19 are over the age of 65 – and they are the most at-risk group for death.

Mr Macron said he did not have any new information about the jab proving it as “ineffective”, but complained that there was a “lack of transparency” in the data AstraZeneca had published.

Last night, Boris Johnson slapped down the Germans for claiming the jab should not be used on over-65s because there is not enough proof it works on them.

Speaking on a trip to Scotland, he said: “This is a vaccine that our own MHRA (regulators) has said produces an immune response in all age groups and is a good vaccine.

“So I’m very confident in it.”

And the PM said he was “very confident” in Britain’s supply for the vaccine, while the EU declared war with AstraZeneca for not providing enough doses on time. Eurocrats demanded the drug giant use vaccines that had been destined for Britain to fulfil their contract.

As tensions flared up, Britain was accused of “vaccine hijacking” by a furious EU leader as a cross-Channel war of words exploded as Brussels unveiled its coronavirus vaccine export ban this afternoon.

Eurocrats announced the UK has been left off a list of 92 countries exempt from an export ban on vaccines which includes almost every other nation that’s near the bloc.

But the new rule even includes a requirement for vaccine makers to disclose all shipments they’ve made abroad in the last three months to try and catch out those that have sent supplies to Britain.

As tensions boiled over chief eurocrat Ursula von der Leyen accused AstraZeneca of misrepresenting its contract with the bloc and ordered the firm to find up to an extra 50 million doses for the continent from Britain.

She told German radio: “In the contracts, two production facilities in Great Britain are also mentioned, which are intended for the production of the vaccine for the EU. How you manage it is up to you.

“There are binding orders and the contract is crystal clear. The phrase ‘best effort’ does not exist. There are clear delivery quantities that are in the contract.

“What irritated us was that, unlike the other companies, AstraZeneca very suddenly announced that it was drastically reducing its agreed deliveries for the first quarter and did not provide understandable reasons why. Now we want clarity on that.”