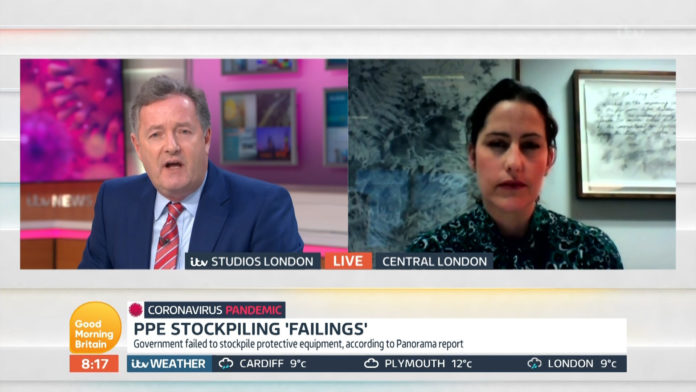 The telly host this morning blasted Safeguarding Minister Victoria Atkins for seemingly not knowing about the pandemic preparedness test.

The testing, codenamed Exercise Cygnus, conducted a three day run on how the health service would cope with a major flu outbreak.

NHS hospitals, local authorities and major government departments were included in the operation that took place in October 2016.

Ministers were briefed on the results of Cygnus, which revealed that there were significant gaps in the NHS “surge capacity” and included a shortage of personal protective equipment (PPE) and intensive care unit (ICU) beds.

Asking Ms Atkins about it today, Piers said: “You as a Government Minister in charge of safeguarding appear to know nothing about it, is that right?

“Are you familiar with exercise Cygnus?”

Ms Atkins tried to explain her focus was Home Office matters, only to be cut off.

Mr Morgan pushed on: “I know what your focus has been, you are a member of her Majesty’s Government, I’m simply asking if you’ve heard of Exercise Cygnus, yes or no?”

The Tory MP again insisted it was not her area, saying: “I am a Home Office Minister, I focus on my portfolio, these questions about the science”

Piers interrupted: “It’s not about the science, you’re smiling again as if this all some big joke.

“With the greatest respect, the Government keeps sending out ministers like yourself who haven’t got a clue.

“Do you see how this looks to the viewers?”

The Minister was unable to explain what the operation involved, despite the host repeatedly asking her to name just one part of it.

Boris Johnson to launch ministerial reshuffle TODAY as he vows to fight on as...

Will Prince Harry and Meghan’s baby Archie steal the show during their chat with...

How much are Coachella 2022 festival tickets?