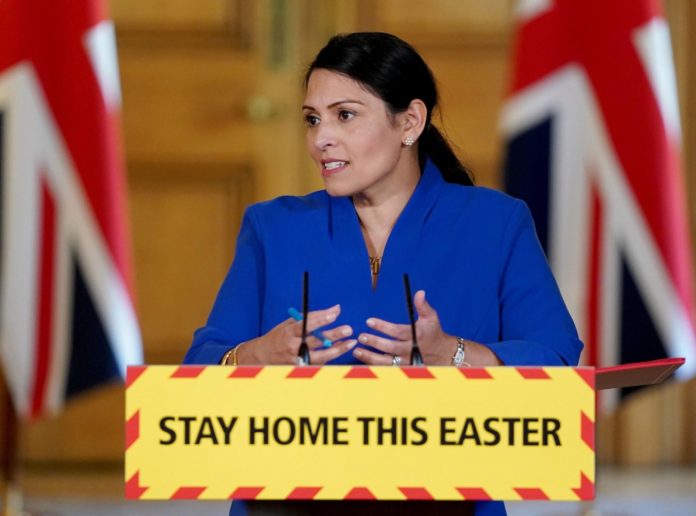 PRITI Patel has said she is “sorry if people feel there have been PPE failings” following the deaths of frontline NHS staff.

The Home Secretary made the comments at the government’s daily coronavirus press briefing, after Matt Hancock revealed earlier today that 19 NHS heroes have died in Britain’s fight against coronavirus. The government has been criticised for not providing enough PPE to health workers, with nurses forced to share equipment despite being on the frontline of the pandemic.

There have also been reports of exhausted medics forced to cut up hospital curtains to make makeshift gowns due to a lack of protective clothing, and others snapped wearing rubbish bags around the bodies and mouths.

After Ms Patel was asked twice if she would apologise to NHS staff and their families over the lack of “necessary PPE”, she pledged to address the crisis.

“And of course we are trying to address that as a government.”

Turkey is one of the countries that has sent planeloads of emergency equipment to Britain, with the first flight carrying the equipment leaving yesterday and another arriving today.

During the briefing, the Home Secretary also announced the launch of a £2million campaign to help domestic abuse victims trapped by the coronavirus lockdown.

Martin Hewitt, the Chair of the National Police Chiefs’ Council, also told reporters that police have dished out more than 1,000 fines to people flouting coronavirus lock down rules.

He said that the 1,084 fines from 37 difference forces shows that the “overwhelming majority of people are staying at home to save lives.” Turkey is one of the countries that has sent planeloads of emergency equipment to Britain, with the first flight carrying the equipment leaving yesterday The Home Secretary’s comments come after Health Secretary Matt Hancock paid tribute earlier to the 19 medics who tragically lost their lives and said an investigation would be launched into each death.

He told BBC Breakfast on Saturday: “My heart goes out to their families, these are people who have put themselves on the front line

“I’m particularly struck at the high proportion of people from minority ethnic backgrounds and people who have come to this country to work in the NHS who have died of coronavirus.

“I find it really upsetting actually and it is a testament to the fact that people who have come from all over the world have come and given their lives in service to the NHS and paid for that with their lives.

“I think we should recognise their enormous contribution.”

The grim figures from the Department of Health also reveal the total number of cases has risen to 78,991. Regarding the lack of PPE, a senior doctor said that medics felt like “cannon fodder” and “lambs to the slaughter” as they deal with covid-19 patients in wards.

Some medics are said to have bought scrubs on Amazon or had friends knit them protective kit.

Mr Hancock has faced criticism from the Royal College of Nurses today after ministers said PPE should be treated as a “precious resource”.

The Health Secretary has said that there is enough to around if it used in line with official guidance.

But RCN general secretary Dame Donna Kinnair hit back and said no PPE was “more precious a resource than a healthcare worker’s life, a nurse’s life, a doctor’s life”.

Speaking to BBC Breakfast, Dame Donna added: “I take offence actually that we are saying that healthcare workers are abusing or overusing PPE.

“I think what we know is, we don’t have enough supply and not enough regular supply of PPE.”

It comes after a doctor who warned Boris Johnson about need for ‘urgent’ PPE in the fight against covid-19 became one of the latest medics to die.

Abdul Mabud Chowdhury, 53, passed away after battling the killer bug for 15 days in hospital.

Dr Chowdhury had last month written to the PM, appealing for urgent action on personal protective equipment for “each and every” NHS worker in the UK.

He added healthcare workers have a “human right like others to live in this world disease-free with our family and children”.

Dr Chowdhury’s death is the latest in a list of NHS heroes of have sadly died fighting the Covid-19 outbreak.

Last week Donald Suelto, who worked at Hammersmith Hospital in west London, died after going into self-isolation with coronavirus symptoms. Many other NHS medics have died from coronavirus since the outbreak began.

Tributes have flooded in for Rebecca Mack, 29, of Morpeth, Northumberland, who worked at Newcastle’s Royal Victoria Infirmary before becoming a 111 medic.

Her heartbroken mum Marion, 59, said: “It’s just horrendous. We can’t even go to see her to say goodbye.

“She was an absolutely wonderful daughter. We couldn’t have wished for a nicer daughter. She was so caring.

“She was just the light of our lives. I can’t even begin to imagine life without her.”

Alice Kit Tak Ong, 70, died at the Royal Free Hospital in London on Tuesday after she contracted Covid-19 from working in surgery without the right equipment.

Her daughter, Melissa Ong, described her mother as a “wonderful woman” who was “generous to everyone else before herself”.

On Tuesday we reported how Dr Anton Sebastianpillai, died aged 75 on Saturday at Kingston Hospital having been cared for in the hospital’s intensive care unit.

The consultant geriatrician, who qualified as a doctor in Sri Lanka in 1967, finished his last shift on March 20. Donald Suelto, who worked at Hammersmith hospital in west London, died after going into self-isolation with coronavirus symptoms Rebecca Mack, 29, lived alone and was self-isolating after she fell ill following a week-long training course Alice Kit Tak Ong, 70, arrived in London from Hong Kong in the 1970s and worked for the health service for 44 years, up until the day she fell ill two weeks ago

His death came after heart surgeon and dad-of-two Jitendra Rathod, who worked at the University Hospital of Wales, died on Monday morning in Cardiff after testing positive for Covid-19.

Dr Rathod was described as an “incredibly dedicated surgeon” who cared deeply for his patients and was highly regarded in the medical profession in Wales.

Elsewhere, a British Pakistani GP based in East London died in hospital on Monday after it is believed he developed coronavirus symptoms.

According to The News International, a newspaper in Pakistan, Dr Syed Haider had been receiving treatment at Queen’s Hospital in Romford where he passed away.

On Sunday, the first serving NHS midwife in England to die after testing positive for the virus was confirmed when Princess Alexandra Hospital in Harlow, Essex, announced the death of Lynsay Coventry, 54.

Two nurses – both young mothers – five doctors and two healthcare assistants have also contracted coronavirus and died since the start of the outbreak.

Nurse Areema Nasreen, 36, died just after midnight on April 2 in intensive care at Walsall Manor Hospital in the West Midlands – the hospital where she had worked for 16 years.

Aimee O’Rourke, 39, also died at the hospital she worked at – the Queen Elizabeth The Queen Mother Hospital in Margate, Kent, on Thursday.

Meghan Markle and Amanda Holden could be twins if these outfits are anything to...

Veterans accuse Boris Johnson of relying on ‘hope’ to save Afghanistan