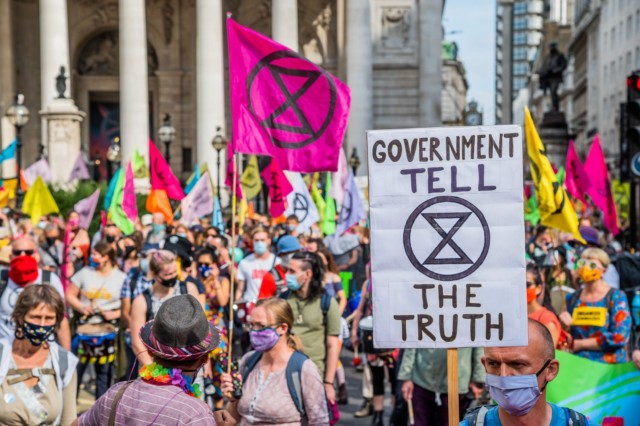 PROTEST marches will be limited to six people in areas with high Covid infection rates under tough new rules being considered by ministers.

The change would mean mass demos such as those organised by Extinction Rebellion activists would be banned in some areas.

Health chiefs are drawing up a new alert system with three threat levels to simplify the local lockdown laws.

Those in the top or “red” tier – in areas with much higher rates than the rest of the country – would face much stricter rules.

These include ban on mixing between households, and most non-essential businesses closed.

But one option is to limit large public gatherings, including marches, rallies and demonstrations.

A source said: “There is a move to limit political protests in areas which are in the top tier to six people.

“While this country cherishes the right to demonstrate peacefully, some feel it action is needed if the event is risks spreading the virus even further.

“It is not just the demonstrators who are at risk but innocent police officers who are called upon to patrol it.”

Another insider said: “These are all tough decisions and will be made with a reasonable balance which takes the interests of health, safety and freedom of speech into account.”

Officials are working around the clock to flesh out the clearer system after the PM and his ministers were humiliated on the airwaves over their own confusion at the rules that can vary town to town.

Each threat level would have different restrictions linked to them, based on the number of local cases.

Areas with around 100 cases per 100,000 would qualify for tier one status according to an early draft of the plan and see greater enforcement of social distancing and mask wearing. But if cases rose above that, such as in the North, then they would be classed as Tier 2 and see bans on household gatherings.

If that failed to work, areas could hit Tier 3 and be placed in to a more extreme form of lockdown that could see pubs, restaurants and shops ordered to shut in order to keep schools and other workplaces open.

A government source said: “A number of options are on the table and no final decision has been made yet.”

Voters head to the polls in by-elections in Boris Johnson’s first test since surviving...