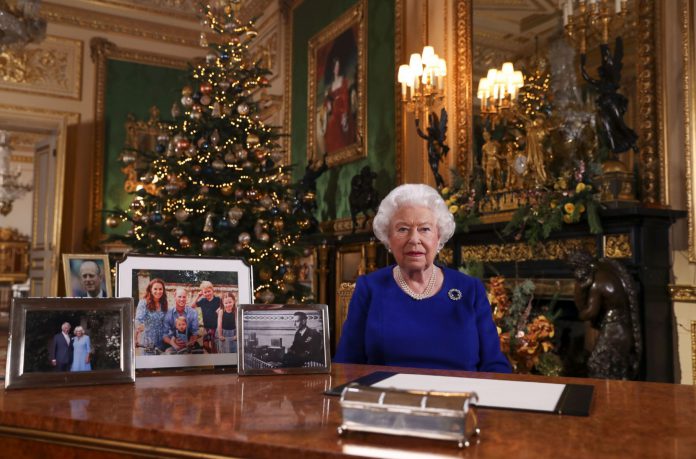 A BROOCH worn by the Queen during her Christmas Day speech hid a secret message that she is a REMAINER, desperate anti-Brexit academics have claimed.

The monarchs sapphire and diamond jewellery, matching a royal blue cashmere dress, allegedly showed her support for the European Union.

The Reading University academic tweeted: The Queen has full editorial control of the Queens Speech and can choose whether or not to give one. She chose not to in 1969.

“So treat the speech as her personal views, right down to her choice of an EU blue dress and an EU stars brooch.”

Dr. Geoff Jones, an aeronautical engineer, added: Her Majesty yet again doing what little she can to show her support for the European Union.

While other Remainers on Twitter pointed out that the Queen wore the brooch when addressing the EU in 1992.

However, not everyone was convinced the 93-year-old monarch was sending out a statement on Brexit.

One tweeter wrote: More likely the blue was chosen to stand out against the background (her dresser says they do this) & that sapphire brooch was a gift from Albert to Victoria.

Taken as a whole with the photos of her father, husband and next three heirs, I think she is emphasising family and continuity.

Another said: “Pretty desperate stuff. Focus on the message and not the attire. And in that spirit……..Merry Christmas.”

One man added: “Any more straws to clutch at?”

While Skys royal commentator Alastair Bruce said: The Queen wears the sapphire broach that the last Queen Regnant, Queen Victoria was given as a wedding present by her husband, Prince Albert of Saxe Coburg Gotha, in 1840.

During the speech the Queen described her familys year as bumpy but described the birth of Prince Harry and Meghan Markles baby Arcgue as a delight.

Her Majesty, posing in front of family snaps, said: The path, of course, is not always smooth, and may at times this year have felt quite bumpy, but small steps can make a world of difference.

Jonathan Ross lands his own travel show – investigating the country’s most famous myths...