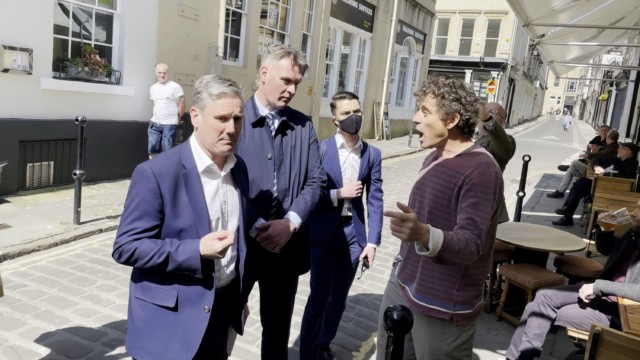 RED-FACED Sir Keir Starmer was today booted out of a Bath pub by its furious landlord.

The Labour leader was turfed out of The Raven after trying to enter during a campaigning walkabout in the city centre.

Landlord Rod Humphris appeared to be held back by bodyguards during the incident as he yelled: “That man is not allowed in my pub.”

Sir Keir, wearing a black face mask, rushed out of the door a few seconds later and scarpered off down the street.

The incident was caught on camera by reporters following the Labour leader.

During a street confrontation Mr Humphris, who says he has been “a Labour voter my entire life”, can be heard saying he’s “incandescent” with Sir Keir’s performance.

He tells him: “You have failed this country, you have seriously failed.”

Sir Keir can be heard to reply that he has spent time talking to frontline health workers who have been “overwhelmed” by the Covid crisis.

He says: “I really don’t need lectures from you about this pandemic.” The Labour leader left the pub a short while later Afterwards Mr Humphris, 54, said he’d kicked the left-wing politician out because he’s failed to hold the Government to account on its pandemic response.

He said: “I had heard that the Labour Party were coming round and he turned up and I told him what I thought of him, basically.

“I think he has utterly failed us as the leader of the Opposition.

“He has completely failed to ask the questions that needed asking, like, why did we throw away our previous pandemic preparedness?

A new survey puts the Conservatives on a massive 43% of the vote, miles ahead of Sir Keir Starmer’s struggling left-wing party which is down on 29%.

The row comes with Sir Keir struggling to turn around Labour’s flagging fortunes ahead of local elections on May 6.

A survey out on Friday put the Conservatives on 43%, miles ahead of Sir Keir Starmer’s struggling left-wing party which is down on 29%.