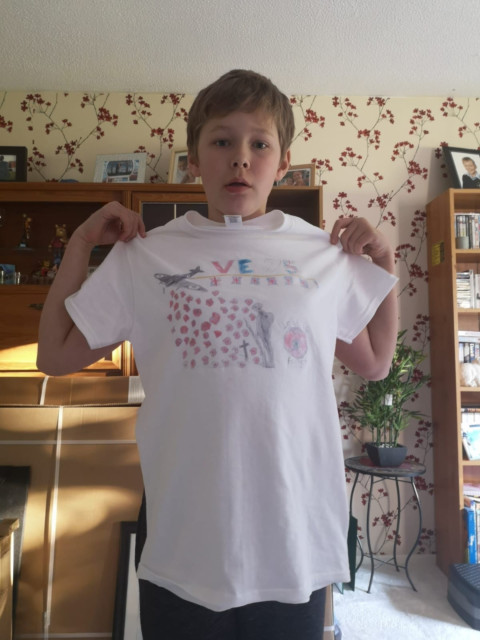 AHEAD of today’s celebrations Jamie Small, 12, raised £1,300 by making his own VE 75 t-shirts and selling them for the Armed Forces Charity SSAFA.

Jamie’s dad Chris, 44 took his own life in 2016, after serving with the Royal Logistics Corp. for 21 years, with tours in Afghanistan, Bosnia, Iraq, Kosovo and Northern Ireland.

Since his dad’s death, Jamie has passionately raised money for charities, and raised awareness for veterans’ mental health issues Jamie’s dad Chris, 44 took his own life in 2016, after serving with the Royal Logistics Corp. for 21 years

This week Government Minister Johnny Mercer thanked him for his efforts on a Zoom call on Tuesday.

Since his dad’s death Jamie, from Wickham Market Suffolk has passionately raised money for charities, and raised awareness for veterans’ mental health issues.

Mr Mercer thanked Jamie for his efforts on the video call and said: “I commend Jamie for his tremendous fundraising work for SSAFA and honouring those who fought so bravely during WW2, his design shows that that the younger generation truly understands the sacrifices that were made, and that on VE Day 75, and every day after, they will not be forgotten

“I am extremely proud of the defence community’s efforts to swing into action – from Jamie to Colonel Tom Moore.

“Your contributions are outstanding and will go on to help many people across the nation.”

Jamie’s mum, Mandy, who works in the NHS as a healthcare worker said: “From such a horrendous experience, Jamie’s bravery to turn the situation around into a way of helping others makes me really proud every single day.

“By fundraising for the very people who helped him at SSAFA, he has ensured other children haven’t had to go through the same experience.” Prince Harry has turned his mum’s death into a ‘mini industry’ with ‘whinging’ &...

Who is Reeta Chakrabarti?