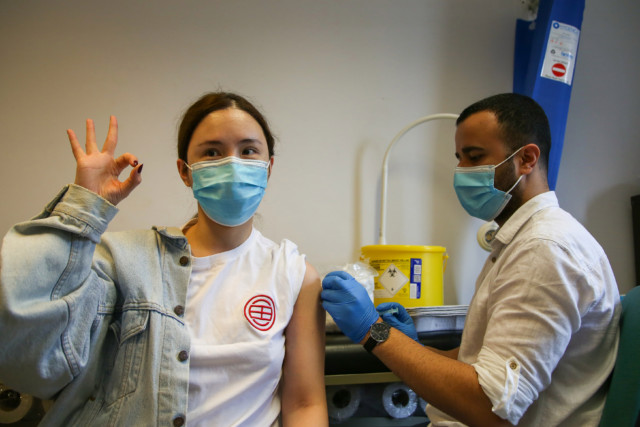 YOUNGSTERS aged 16 and 17 will be given the green light for jabs within days.

Ministers have been privately pushing for a vaccination drive for the over 16s before they head back to schools and colleges in September.

And the Joint Committee on Vaccination and Immunisation is poised to give the nod as soon as the weekend, HOAR has learnt.

The roll out to children would begin almost immediately, insiders say.

A Whitehall source told HOAR in June they were pushing for the move, saying: “Late teens are some of the most socially active members of society so if we can cut that transmission, it can only be a good thing.”

There are growing fears of a fresh wave of Covid cases this autumn as kids go back and the weather gets worse.

A hint of the coming decision was dropped by chatty Scottish First Minister Nicola Sturgeon tonight, who said: “I am hoping, possibly veering towards expecting, updated advice from the JCVI literally in the next day or so.

“And I very much hope that that expectation will prove to be the case,” she said.

“And I am hoping, but this is the JCVI’s advice, that they will recommend further vaccination of people in the 12 to 18 year olds age group.

“But I’m particularly hopeful that we will see some updated recommendations in relation, as a priority as a first part of this, for 16 and 17 year olds.”

Shadow health secretary Jonathan Ashworth said this evening: “With the JCVI apparently about to give the green light to vaccinating 16 year olds, ministers need to ensure plans are in place to roll out this vital next stage of vaccination while ensuring parents have all the facts and informative they need.”

A whopping 85,488,857 doses of the Covid vaccine have so far been administered across the UK. It comes as the UK today recorded another 138 Covid deaths – the highest daily total for five months.

But the number of people testing positive for the virus dropped for the fifth day in a row, with a further 21,691 infections recorded in 24 hours.

Today’s figures bring the total number of cases since the pandemic began to 5,923,820.

According to the Office for National Statistics, Crabtree and Fir Vales in the Sheffield district has bore the worst death toll so far.

West St Leonard in Sussex came second in the grim tally, with 71 virus deaths in the last 14 months.

Third in the morbid league table was Walton and Frinton Coastal in Tendring, which saw 70 deaths up to April. Kids MUST carry on wearing masks in classroom or risk third wave of Covid...