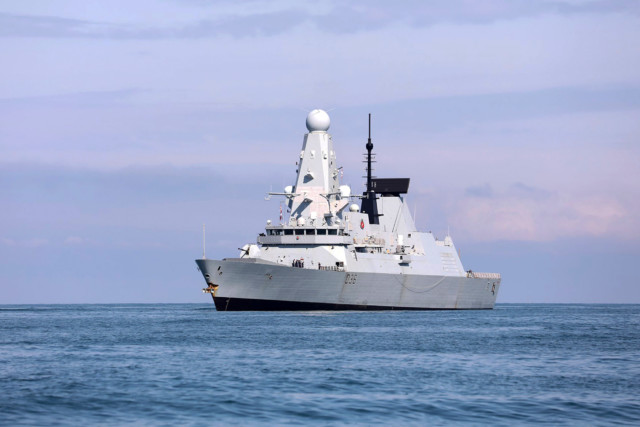 TOP secret Ministry of Defence papers were left at a bus stop by “mistake” by a government official, MPs were told today.

An urgent probe is underway after the sensitive cache of documents was handed to the BBC by a member of the public who found them in a soggy heap last week in Kent.

Defence minister Jeremy Quin told the House of Commons the leak appeared to be the result of a “mistake” by one individual who “self-reported” the loss of the papers to the Ministry of Defence.

The official concerned has now been suspended from accessing sensitive material, the minister added.

The papers included documents with information on the likely reaction of Russia to the passage of a Royal Navy destroyer which passed through disputed waters off the coast of Crimea last week.

Moscow sparked fury after claiming warning shots had been fired towards the HMS Destroyer as it sailed through a contested part of the Black Sea – but this was dismissed by the UK government.

Boris Johnson denied that the ship’s voyage was an act of provocation, insisting that it was within international law.

HMS Defender, HNLMS Evertsen and USS Laboon in operations in the Black Sea five days ago – with a Russian vessel visible on the horizon

Mr Quin said the stash of documents included one paper that was classified “Secret – UK eyes only”.

He said: “The papers have now been recovered from the BBC and are being assessed as I speak to check that all documents missing have been recovered and what mitigation actions might be necessary.

“The investigation will look at the actions of individuals, including the printing of the papers through to the management of the reported incident and at the underlying processes for printing and carriage of papers in defence.”

Mr Quin said he hoped the investigation could be completed in “as little as a week”, adding: “It’s important that one gets on top of that mistake and what can be learned.”

Shadow defence secretary John Healey said the loss of the material was “certainly embarrassing for ministers, but it is deeply worrying for those concerned with our national security”.

A number of MPs, including Tory backbenchers James Sunderland and Bill Wiggin and Labour’s Chris Bryant, suggested the official concerned should be required to “walk the plank” if they were found to have acted negligently.

But Mr Quin said that he did not want to “pre-judge” the result of the MoD investigation.

Did you miss our previous article…
https://www.hellofaread.com/politics/michael-gove-insists-he-just-gets-on-with-the-job-after-wife-sarah-vines-article-about-how-politics-wrecks-marriages/

Coronation Street star Alex Mardell stuns in a bikini as she shows off incredible...

Matt Hancock’s wife Martha ‘battling long Covid after catching it from him’ before affair...

Boris Johnson reveals he needed ‘litres and litres’ of oxygen as he battled ‘scary’...