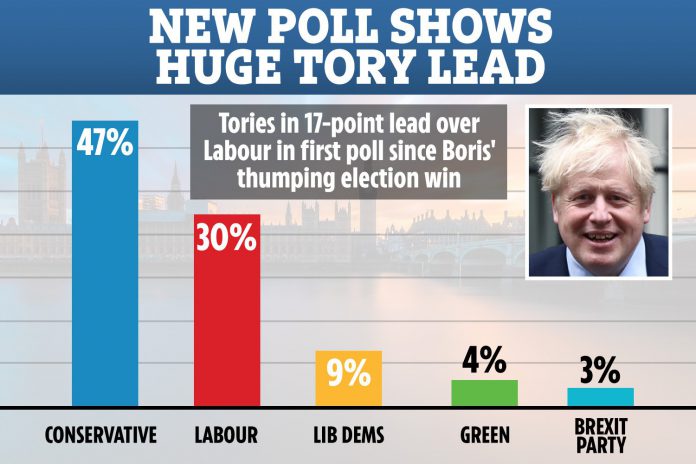 THE TORIES have opened up a 17-point lead over Labour in the first poll since Boris Johnsons thumping election win.

An Opinium survey found the Prime Minister was doing even better than expected, with the Conservatives on a whopping 47 per cent.

Labour are behind on a meagre 30 per cent, with the Liberal Democrats languishing on just 9 per cent.

In the crucial Christmas election, the Tories received around 43 per cent of the vote, beating Jeremy Corbyn‘s Labour’s on 32 per cent.

The poll comes with Britain just 11 days away from finally leaving the European Union.

While the Tories have been focused on Brexit, Labour still have Mr Corbyn in place and are yet to elect a new leader.

Adam Drummond, head of political polling at Opinium, said: Voting intention with nearly five years to go before another general election isnt the most predictive exercise but the takeaway from these results are that Boris Johnson has yet to do anything to annoy the diverse coalition that gave the Conservatives such a substantial majority in December.

The key factors will be whether or not they are able to deliver a benefit to those traditional Labour voters who backed the Conservatives for the first time in 2019 and whether Labours next leader is able to capitalise on any mistakes.

It comes as a Yougov study found the main reason people made the jump from Labour to the Tories was Brexit.

Of those who changed party, 49 per cent said it was down to Brexit, 27 per cent the leadership, and 10 per cent the wider policy offering.

Love Island’s Amy Hart forced to deny getting fillers after fans point out her...