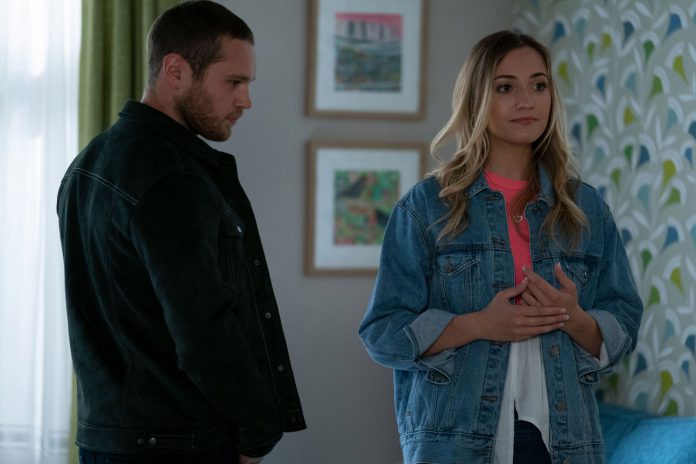 LOUISE Mitchell and Keanu Taylor will leave their friends and family in Walford shocked tonight when they announce their plans to move to Portugal.

As Sharon Mitchell returns to the Square from her holiday in the sunny country, she pretends to be surprised to hear the loved-up teens news.

But, when theyre alone, Keanu pleads with Sharon to stop Louise from leaving, but he gets a sharp shock when Sharon tells him to play along with Mel Owen.

So are Keanu and Louise really about to leave the Square for good?

Heres what we know

The pair will announce their plans to move to Portugal

Are Louise and Keanu leaving EastEnders?

In a word, no. While it would probably be a good move for the pair to get away from Walford and bring up their baby somewhere with less drama, there are no plans for either character to leave as far as we know.

Neither the EastEnders bosses or Tilly Keeper and Danny Walters who play Louise and Keanu have made any announcements about them leaving the BBC soap.

In fact, it looks like both characters will be around for the long haul, following the reveal that Keanu is the father of Sharons unborn baby, as well as her step-daughters.

Actress Tilly teased earlier this year that her pram-face character will turn evil when the news of Keanu and Sharons affair becomes public knowledge.

The actress – who has played Louise since 2016 in the BBC soap – has hinted the pregnant schoolgirl will embrace her Mitchell legacy as a villain to take revenge on Keanu and Sharon.

Speaking exclusively to The Sun Online, Tilly said: “It would be so interesting for Louise to go full psycho.

“When I was introduced into the show Louise did have a villainousstreak to her so it would be lovely to explore that again.

“And the golden rule is you never cross a Mitchell so we’ll see.”

How Coronation Street newcomer Kimberly Hart-Simpson went from McDonald’s boss at 16 to soap...

Will Mellor devastates Hollyoaks fans as he rules out return as Jambo for 25th...