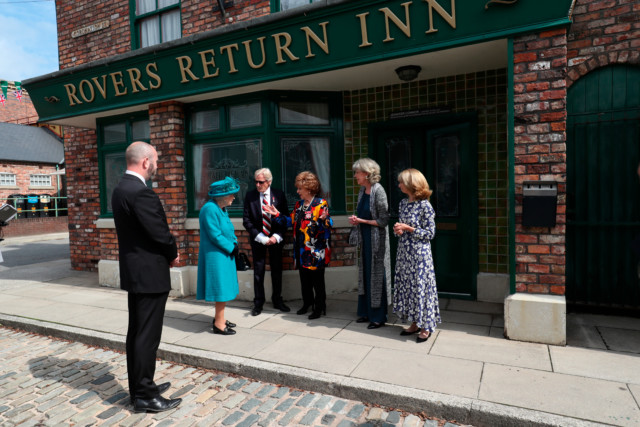 THE cast of Coronation Street were told the Queen was set to visit just 30 minutes before she arrived today.

The gobsmacked stars had been warned to dress smartly but had no idea it was for a royal visit – until the very last minute as bosses tried to keep the trip as top secret as possible.

A source told HOAR: “The cast knew something was going on because they had been told to be on set today and there would be no filming, but they could never have guessed why.

“Luckily they had been asked to dress nicely so they all looked spot on for the surprise visit.

“There was a real buzz when they were finally told and they couldn’t quite believe it!

“Bosses didn’t want everyone to find out so thought it was best to keep it on the down low until they really had to.”

Earlier today the Monarch dropped by the set of the world’s longest-running soap, which is celebrating more than 60 years on our screen- for a 40 minute visit.

Her Majesty, 95, met crew and cast before being escorted by Dame Carolyn McCall, CEO of ITV, into the Rovers Return, at Media City in Manchester. Stars from the long-running soap, including William Roache, 89, who plays Ken Barlow – and Barbara Knox, 87, who plays Rita Tanner, lined up to greet the monarch.

Sue Nicholls, 77, who played Audrey Roberts, and Helen Worth, 70 – better known as Gail Platt – were also on hand to welcome The Queen.

William told the Queen he had first seen her when she visited Jamaica in 1963, when he was serving as an officer with the Royal Welsh Fusiliers. He added: “Thank you so much for coming today.”

Barbara told the Queen when she first arrived: “Good morning, your majesty, you have brought the sunshine.

“You know you are like a ray of sunshine. “And you’ve given us all such a lift (with) you coming, thank you very very much indeed.

“We all absolutely adore you, the world adores you.”

The Queen, who asked how they had managed to keep filming during the pandemic, replied: “It’s really marvellous you’ve been able to carry on”. William replied to laughter: “Well, ma’am, you’re the one who has carried on.”

The Queen was seen inside the studio where the interior of the Rovers Return is filmed as she met members of the production team.

Did you miss our previous article…
https://www.hellofaread.com/soap-opera/ex-eastenders-star-matt-lapkinsas-rushed-to-hospital-with-mystery-liver-illness/

Boris Johnson in hospital with coronavirus ‘as a precaution’ after failing to shake off...

Meghan Markle and Prince Harry offer peek inside their LA mansion as they crash...