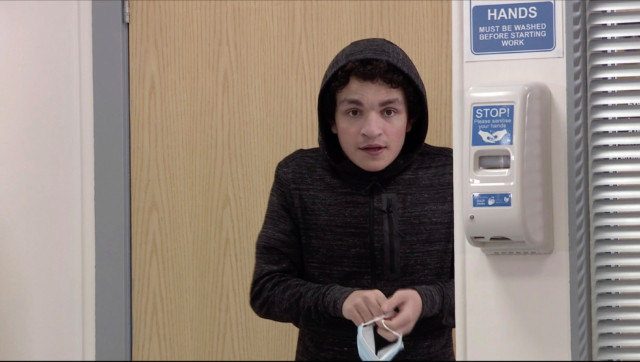 CORONATION Street fans spotted a major blunder on the hospital set during Friday’s visit to the Manchester cobbles.

Currently in hiding with Leanne and Nick, Simon risked everything by going to the hospital to see his dad Peter before his liver transplant.

Simon visited his dad in hospital despite being in hiding

However, viewers were quick to notice the lack of patients and staff at the hospital.

The only staff member was one of Harvey’s thugs posing as a cleaner.

He spotted Simon and made a secret phone call, telling another of Harvey’s minions on the other end: “He’s here, the kid. Sending a photo now.”

Simon managed to get away just in time, but the thug brutally attacked Peter as he yelled at Simon to run.

But fans were still bewildered by the empty corridors and how no staff spotted the undercover cleaner.

One viewer penned: “Where are the rest of the hospital staff?”

Another wrote: “No one in the hospital heard any of that, Peter shouting or no one saw the fight?” A third said: “No one working in that hospital!”

A fourth asked: “So none of the hospital staff spotted the rogue cleaner?”

Carla is informed her husband Peter has gone for a scan to check for “head injuries”.

After a narrow escape, Simon gets back to Nick and Leanne and demands to call his dad to see if he is okay after the attack. Leanna tells Nick to get rid of the sim card

However, Leanne is adamant to cut all ties and tells Nick to throw away the sim card for the phone.

The episode ended with Peter looking at the address Simon left him.

Will Peter be tempted to reunite with his son even though he needs to get back onto the transplant list?

Did you miss our previous article…
https://www.hellofaread.com/soap-opera/michelle-keegan-shares-her-plans-for-a-lavish-walk-in-dressing-room-at-her-1-3m-dream-home-with-mark-wright/

Over 3,000 members of Momentum are part of group that plots how to smear...

How do I sign up to Disney+? Subscription cost and how to get money...