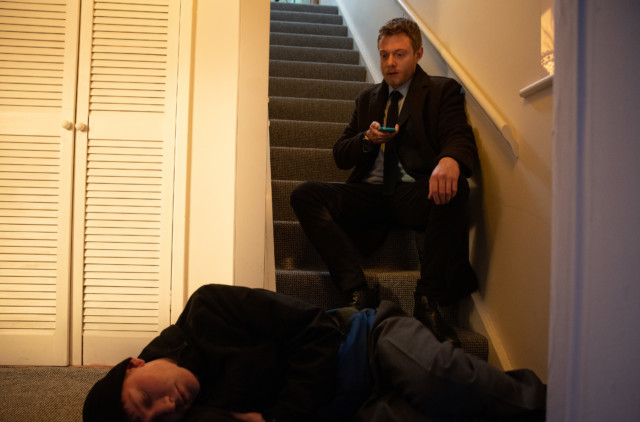 FOLLOWING an intense argument with Max Turner, Daniel Osbourne could be set to reveal the truth of his actions.

An upcoming scene in Coronation Street will show the Weatherfield High teacher ready to expel his lie.

Max Turner was pushed down the stairs

Recent episodes of the ITV soap have shown a tense confrontation between Max (portrayed by Paddy Bever) and Daniel (Rob Mallard).

Next week on the cobbles, Daniel gets ready to face the music and tells the truth about Max’s accidental fall down the stairs.

The scene will show Daniel calling at No.8 to apologise for speaking of David’s rape to his adoptive son Max without his consent.

ITV viewers know what truly happened between Max and Daniel.

Max has held a grudge against the teacher for a long time and decided to trash his apartment after a comment was made about David Platt’s (Jack P. Shepherd) rape ordeal in 2018.

But when Daniel came home, finding Max had accidentally broken clay handprints made by his late wife Sinead and their son Bertie.

After being shoved out the door, Max went on to taunt Daniel even further by mentioning his ill-fated relationship with Bethany Platt, which occurred soon after Sinead’s death.

This only made matters worse between the two.

Blinded with rage, Daniel pushed Max once again but the latter unfortunately tripped on his bag and down the stairs, laying in a crumpled heap.

Since then, Daniel has tried getting out of police trouble with the law by claiming it was an accident.

Daniel stated to the authorities that Max only fell after he closed his own door.

But the police returned to him, stating that he’s being investigated.

Meanwhile, Max was taken to hospital.

The incident could reignite the feud between the Barlows and the Platts but also shows a return of Daniel’s dark side.

This wouldn’t be the first time his violent urges wreak havoc as Corrie fans still remember him pushing his own father Ken down the stairs during a fight over Sinead.

But during his upcoming phone call to No.8, will Daniel confess to everything?

Will Max point a finger to him once he recovers?

How will David react to his apology? Daniel has had a rift with Max for a long time Four in ten UK businesses are down to less than six months of cash...

Hollyoaks Nancy and Kyle are left reeling after she loses another baby following school...