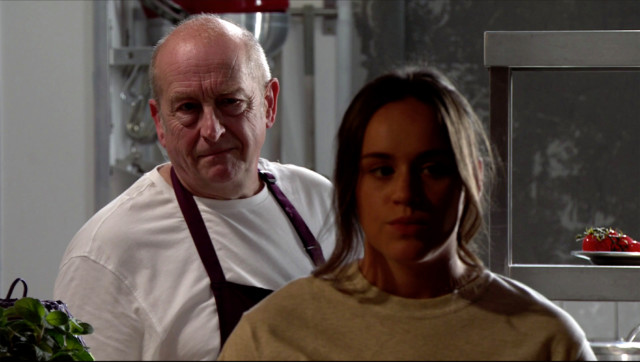 FAYE Windass puts herself in danger next week in Coronation Street when she turns on grandfather Geoff Metcalfe and tells him to sell Speed Daal to Alya.

Faye has been refusing to see Geoff’s nasty side for months in the ITV soap and raged at Sally when she kicked him out of her house.

When Geoff moved back to No.6 with his tail between his legs, Faye insisted she was moving out and going with him.

But fans were convinced she’d put two and two together when she witnessed Geoff threatening Elaine in a ginnel just before she disappeared off the face of the earth.

Faye also heard Geoff raging at Sally and calling her a string of nasty insults last week and told Geoff he was out of order. Faye overheard Geoff arguing with Elaine ahead of her disappearance

Next week’s episodes of Coronation Street will see Yasmeen troubled to hear from Alya that Elaine has gone missing and that she won’t be able to testify at the trial.

Yasmeen looks terrified as she contemplates a life behind bars.

Later, Alya confronts Geoff in front of Faye, who then tells Geoff that he might be better selling his share of Speed Daal to Alya.

Has Faye turned against Geoff and might she tell Alya about his showdown with Elaine ahead of her disappearance?

If so, could she be in danger?

Corrie producer Ian MacLeod has already confirmed that Geoff will meet his downfall this year.

He previously said: “What form that comeuppance takes is still in discussion. We wanted a redemptive ending ultimately for Yasmeen.”

Adding that he, Ian and Shelley had been in correspondence with real-life abuse victims, Ian continued: “For the sake of all those people, we have to tell the right ending with some positivity and optimism.”

Might Geoff’s downfall have something to do with Faye?

I’m A Celebrity fans say they’re being ‘trolled’ as stars hit the pub –...