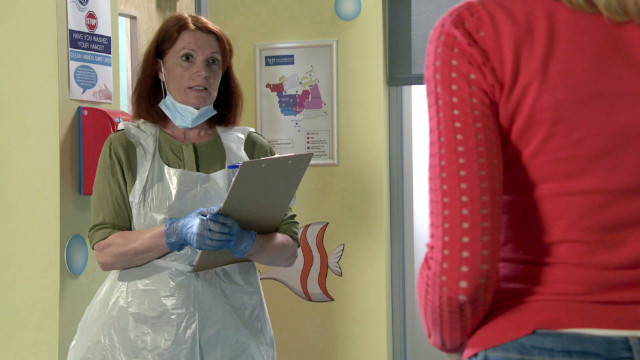 Leanne and Steve’s worlds came crashing down in the ITV soap when Oliver was officially diagnosed with mitochondrial disease back in June after suffering from multiple seizures.

The incurable form of the disease will eventually take Oliver’s life.

But viewers have watched Leanne remain in denial about this fact, and insist that her son is going to be alright.

But next week’s episodes of Coronation Street will see the doctor break the news to Leanne and Steve that they’ve had to up Oliver’s sedation again as his seizures are getting out of control – and that life support is the only thing keeping the youngster alive. Leanne angrily accuses the doctor of giving up on Oliver

Meanwhile, Toyah and Imran are thrilled when the social worker says she’ll recommend them to the fostering panel.

But their good mood is short-lived when Nick calls from the hospital and breaks the awful news about Oliver.

Leanne tells Nick, Steve and Tracy that she won’t give up on Oliver and that she’ll do whatever it takes to keep him alive.

Later, the consultant reveals to Steve and Leanne that another specialist is coming over to assess Oliver and give a second opinion. After doing some research online, Leanne tells Steve that there’s a hospital in Germany where they can treat people with Oliver’s condition.

But Leanne’s hopes are shattered when the specialist confirms that Oliver will never be able to breathe unaided and that it’s time to talk about switching off his life support.

A devastated Leanne breaks down and angrily accuses the consultant of giving up on her son.

Later, Leanne and Steve facetime the doctor in Germany, but Steve is worried when Leanne downplays how seriously ill Oliver is.

Leanne refuses to listen to Steve and is overjoyed when the doctor says he’ll treat Oliver.

Later, Steve tells Tracy and Emma about the £500,000 needed for Oliver’s treatment in Germany.

Emma promises to come up with some fundraising ideas, but Tracy urges Steve to talk to Leanne about downplaying Oliver’s symptoms to the doctor.

Later, after a word from Steve, Leanne calls the doctor and gives an honest account of Oliver’s case.

Will the doctor still agree to treat their son?

Fortnite free items you can claim for Winterfest 2022

Queen Elizabeth health news: Her Majesty, 96, ‘may be too frail to appear on...