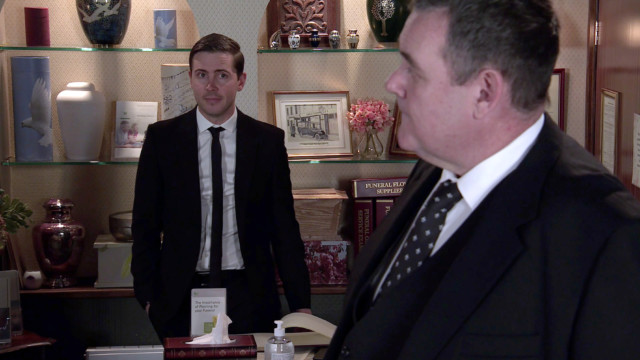 TODD Grimshaw is sacked from the Undertakers after flogging the most expensive funeral package to a grieving widower next week in Coronation Street.

Todd will win his job back when he shows a more vulnerable side after being forced to face his tragic past in the ITV soap next week.

George sacks Todd after he tries to exploit a grieving client

Viewers will see Todd look over the figures and warn George that people are too slow in paying their bills and he needs to be harsher with them.

George brushes off Todd’s concerns and tells him to stick to his job.

Later, Eileen listens as Todd phones a client to chase up funeral payments, and warns him that George won’t be happy about it.

Sure enough, George is horrified to realise Todd has been pressuring clients for deposits before the funerals have taken place – and resolves to refund them all.

When a client calls at the undertakers to arrange his wife’s funeral, Todd flogs him the most expensive package.

Later, the client’s son turns up and complains to George about Todd’s ruthless approach. Todd returns home with his tail between his legs and admits to Eileen that George has sacked him.

Eileen storms over to confront George but when he reveals Todd was ripping off vulnerable customers, Eileen is mortified.

George agrees to let Todd work his week’s notice, explaining that they have the body of a young boy in the chapel of rest and that he’d better show some respect.

Todd is reminded of his own son when Stuart, an old mate from his past, reveals the young buy in the chapel of rest is his son.

George is sympathetic and, after seeing a softer side to Todd, offers him his job back.

Boris Johnson would be denied 40-seat majority if one in three Remainers voters team...

Channel 4 slammed as it shows Couples Come Dine With Me and Flog It...

The Crowns show runner reveals all about Queens relationship with twin Margaret Thatcher in...

Boris Johnson risks deepening tensions with Donald Trump by cancelling a trip to the...