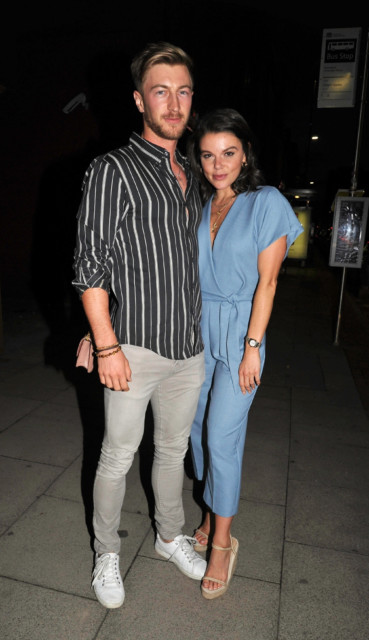 The couple looked loved up as they made their way to a Spanish bar in Manchester on Saturday.

Faye looked more loved up than ever with her personal trainer boyfriend Joe Davies.

The former Corrie star wore a blue jumpsuit, accessorised with a watch and a gold necklace.

They were all smiles as they walked past the cameras, holding hands while they walked away. The pair looked loved up on their way to the bar She stunned in her blue jumpsuit

In photos posted to Instagram, Faye flashed a huge ring during their date night.

Faye and Joe were pictured together at events in summer of last year, including the red carpet at the White Christmas musical press night in November.

The couple went public in January with workout posts on Instagram.

Before, Faye was with Gareth Gates – who she met when they both starred in Legally Blonde in 2012.

They broke up in August 2019 after dating on and off for seven years. The pair locked down together The Pop Idol star and the former Corrie star – called off their engagement after deciding they are better off as friends.

Pals close to the couple at the time said: “Gareth and Faye have been through a lot together but they just can’t make it work.

“They are both really sad about it but have vowed to remain friends.”

Gareth popped the question to Faye in January of this year just four months after getting back together after a brief split in September of last year.

While Faye got with Joe, Gareth has moved on with Ibiza DJ Chloe McLennan – 11 months after his heartbreaking split.

Did you miss our previous article…
https://www.hellofaread.com/soap-opera/tamzin-outhwaite-and-aj-pritchard-set-to-appear-on-im-a-celebrity-in-double-blow-to-tv-rival-strictly-come-dancing/