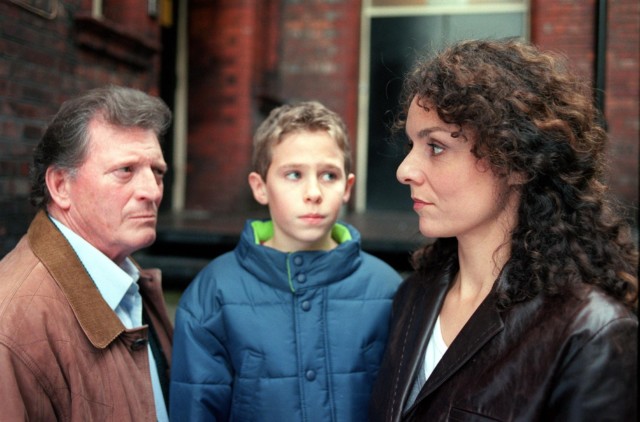 The Glasgow-born star, 34, was just 14 when he arrived on the Coronation Street cobbles, starring in the soap for 54 episodes before he was re-cast for an older actor in 2003.

Yet 20 years on, only the most eagle-eyed of soap fans will have spotted Iain in a host of successful TV series both at home and Stateside.

Ian, who now has a beard, moustache and close-cropped hair style has since starred in BAFTA winning BBC One series The Fades, as well as last year’s mini-series Us on the same channel.

He followed this up with a role in political thriller, Roadkill.

Iain has also excelled on the big screen too, starring in movies Shell, Lost River and Overlord.

He also bagged a series role on Marvel TV series Agents of S.H.I.E.L.D to boot.

The drama is set in the same world as the likes of Iron Man, Thor and Captain America, and there have been crossover characters from the movies appearing in the ABC drama.

Adam arrived on Corrie as a sweet, innocent 12-year-old child in 2001 having grown up in secret in Scotland.

It was later revealed that Adam’s mum Susan Barlow – Ken Barlow’s daughter – had actually conceived Adam while she was married to Ken’s enemy Mike Baldwin and he was his secret son.

Sadly his mother died not long after dropping that particular bombshell and Adam was left being shipped between Mike, Ken and his eventual boarding school in Scotland.

On bagging his iconic soap role he previously told the Daily Record: “I was just a kid who landed a good part.

“I’d no idea it was watched by millions. I hadn’t even seen Corrie.”

Thew publication reported he was replaced as soap bosses were looking for a super handsome actor.

He said to the publication: “It’s probably true I wasn’t good looking enough but I’ve no hard feelings.” Iain, now 34, has since gone on to star in BBC drama US He also bagged a telly role in Marvel series, Agent of S.H.I.E.L.D He donned a pair of glasses for a role in BBC drama, Roadkill

Did you miss our previous article…
https://www.hellofaread.com/soap-opera/eastenders-spoilers-legend-returns-as-ben-mitchell-struggles-to-cope-after-horror-attack/

Rishi Sunak & Liz Truss raced over to help Kate McCann after she fainted...