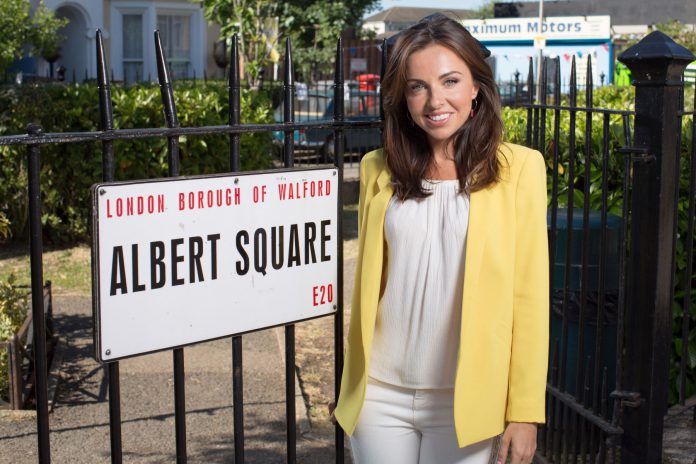 One Walford regular is set to meet a grizzly end on a boat for the 35th anniversary special.

But Louisa may have let slip her character Ruby isn’t going to die as her she talks about how much the writers can do with her character.

Speaking about the future of the character, she told the Express: “I started as a child and I’m here 15 years later.

“I like that she’s grown up and she’s so feisty. There is just so much that the writers can do with her.”

When asked directly about the event, she remained tight-lipped: “I don’t know. We’re not allowed to say anything, we’ve been told we can’t say anything.”

Disaster will strike after the Queen Vic landlords Mick and Linda Carter win Pub of the Year contest and decide to go all out with their celebrations.

The pair decide to host a bash on a party boat along the river Thames, inviting half of the Squares residents to join the celebrations.

A source on the BBC soap told HOAR: Where better place for a major death than on the Thames itself, which is so central to the show?

Trouble has been brewing in Walford for a while, and they decided it was the perfect occasion to see off a big name.

Its thought that as part of the dramatic scenes Sharon will give birth on the boat, but she is just one of many who could see themselves go overboard to an icy, watery death.

Fans are guessing who will meet their icy end.

Alcoholic Linda could lose control and end up in the water, or she could seek revenge on Mick who told child services about her battle with booze.

Evil stalker Leo King is another who’s in the firing line as his reign of terror against Whitney Dean continues.

Most likely is that Keanu will return after being “killed” by the Mitchells and Martin Fowler.

He was let go after Linda Carter caught sight of them in a boozy episode, as long as he never returns to Albert Square.

Keanu’s life was in danger after Phil Mitchell discovered he had an affair with his wife Sharon – and that he was the father of her baby.

Stuck with an Xbox One? Now you can play Xbox Series X games on...