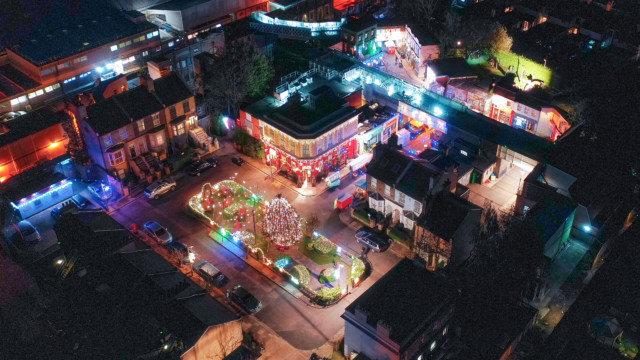 THE EastEnders set has switched from summer to Christmas in weeks.

A tree and lights are up outside the Queen Vic. Stars will soon film the seasonal special at Elstree, Herts.

Danny Dyer, 43, who plays Mick Carter, revealed we can expect a ‘dark’ Christmas.

He said: “We’re due another dark Christmas, aren’t we? We’ve really took it up a level.”

The long-running BBC One soap returned to our screens on Monday this week. But not everyone is in a festive mood, as Danny Dyer said: ‘We’re due another dark Christmas’

Cast and crew began filming again on June 29, more than three months after lockdown forced a halt in production.

A number of gripping storylines have now resumed, the fate of the Old Vic amongst them.

Viewers were left on a cliffhanger after the finale on June 16, as both Sharon Mitchell and Ian Beale swooped in to buy the iconic establishment.

Coronation Street fans all have the same complaint about racist Griff

EastEnders legend June Brown’s three children secretly appeared at her funeral – did you spot them?

Tier 3 lockdown could affect over 21million Brits within weeks

Love Island WILL be filmed at the famous villa in Majorca in late August...

Who attacked Stacey in Eastenders?

Clocks going forward – Will the move to Daylight Saving Time cut my wages...