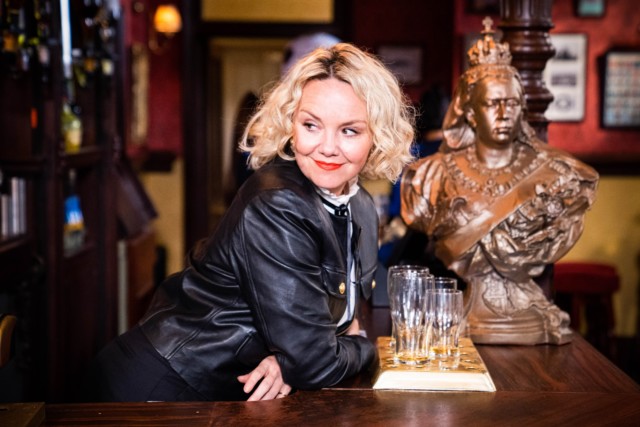 EASTENDERS fans are convinced Janine Butcher is going to scheme to get the Queen Vic after she got a job as a barmaid.

The scheming queen – who is played by actress Charlie Brooks in the BBC soap – convinced Frankie Lewis to give her a job behind the bar.

Longtime viewers know Janine lost the pub after Mick and Linda bought it from under her, leaving her fleeing the Square.

But tonight she finally got herself next to the bust of Queen Victoria – and was very happily home.

As Nancy walked in to find Janine clearing tables, she demanded to know why.

Janine replied: “It broke my heart to see poor Frankie struggling so I stepped in to help.”

Janine helped Frankie out behind the bar

She said: “I could help out on the regular if you wanted. Why don’t you hire me?”

“You might be able to run this bar deaf but I can do it with my eyes closed,” she added, convincing Frankie to hire her.

Later Sharon walked in to find Janine behind the bar and was horrified.

“You have got to be kidding?” said Sharon.

Sharon shot a barb back about how Frank would be embarrassed with her, before Janine pointed out her brother was more impressed with her romp the night before.

She added: “Who was the last person who got you panting Sharon? Was it pensioner Mitchell or did Beale make you squeal?” But after her run in with Sharon, Janine looked around the Vic and looked right at home.

And when Frankie came back to check on things, Janine told her: “Do you know what Frankie?

“It feels great to be back.”

And now viewers are convinced she is going to plot to get the Vic back.

One wrote: “Janine Butcher is The new Landlady #Eastenders!”

A second said: “Janine back behind the bar #EastEnders”

Another added: “LOVE Janine working in the Vic again #EastEnders.”

Harry and Meghan’s son Archie targeted by white supremacist ‘for being mixed race’ in...

Schools reopen to all kids in Wales today – but only a third can...

One Love Island boy has been dumped and already left the villa as...

Did Palace toadies topple Crown VI before it got to Prince Andrew and Megxit?