UNVEILING his latest get-tough migrant policy, Boris Johnson posed for the cameras in front of a gleaming Tekever AR3 drone.

The photoshoot at Lydd Airport in Kent in April saw the Prime Minister pledge a further £50million to stem the flow of dinghies, with measures including improved aerial surveillance.

Boris Johnson looks at the surveillance drone at Lydd Airport 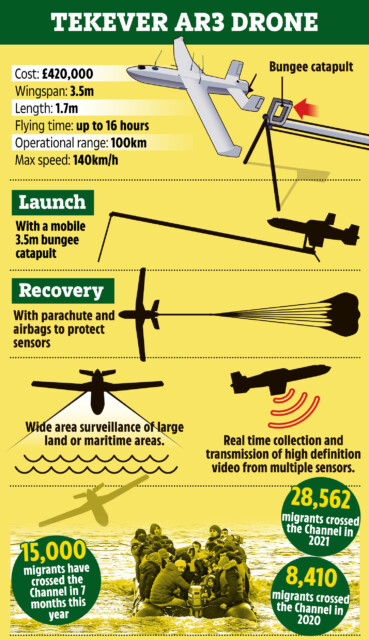 Now, HOAR can reveal the same AR3 — or a similar sister drone — “malfunctioned” and plunged into the English Channel.

The £420,000 Home Office drone, which was supposed to be scouring the sea for migrants, was instead discovered floating in the waves by a bemused fisherman

The skipper strapped the high-tech device — which has a 3.5meter (11ft) wingspan — to the back of his boat with ropes and hauled it back to port in Dover.

It is the latest setback in the Government’s attempts to thwart cross-Channel people smugglers, 15,00 of whom have already made the trip this year, with 1,600 in the past ten days alone.

A Dover local told HOAR: “It wasn’t exactly what the skipper expected to catch on a fishing trip in the Channel.

“He found the drone floating in the sea and tied it to the back of his boat with a few ropes and brought it back to harbour. He reported it to the authorities who then arranged for it to be collected.

“It’s an embarrassment for the Government and just adds to the chaos in the Channel right now.”

The fisherman who discovered the drone on July 5 declined to talk about the incident.

The AR3 was operated by private Southampton-based firm Tekever on behalf of the Home Office.

The Home Office said: “We are aware of the incident involving a Tekever drone on July 5, it was recovered and the malfunction has since been corrected.

“Our ability to operate drones in the Channel has not been impacted.

“Evil criminal gangs are putting profit over people by facilitating dangerous and illegal small boat crossings and we are committed to stopping them.”

The 1.7meter-long (five feet) AR3 is designed to be launched by catapult from ships and can remain in the air for 16 hours. It can return to earth by parachute.

A drone package that includes parts, training and ground facilities can cost around £420,000.

Tekever chief operating officer Paul Webb said: “During a routine drone operation, a technical malfunction was detected on one of our drones.

“We followed the necessary protocol and landed the drone safely for collection.

“The cause of malfunction has been identified and corrected.”

The Prime Minister used his spring visit to Lydd Airport to formally announce that the Royal Navy was assuming Border Force’s responsibility for migrant operations.

He pledged £50 million to pay for the new boats, aerial surveillance and military personnel.

He also once again confirmed plans to send asylum seekers to Rwanda, a policy since mired in a legal battle without a single migrant being put on a plane to the central African nation.

Last week MP John Spellar hit out at the Navy’s Channel operation, accusing them of being “tour guides for illegal migrants to get them to our shores”.

The Labour MP’s comments to the Commons Defence Committe were described as “unfair” by Armed Forces minister James Heappey.

However, a Channel fisherman told HOAR the people-smuggling business is now “more streamlined and efficient than ever”.

The skipper revealed: “The talk around the harbour earlier this year was ‘the Navy are here. It’s all going to be sorted’.

“But although they have taken over command of operations from Border Force, it’s still Border Force boats that pick up the migrants.

“The Navy just tow the empty dinghies back to harbour, which Border Force used to do. They’ve become glorified tug boats.”

He agrees with assertions that the Navy’s reassuring presence has made the crossing safer, which has encouraged more migrants to set off from France.

The skipper added: “The migrants are escorted to the sea border in the middle of the Channel by the French.

“Then they’re picked up by the British then whisked to a big compound at Dover Harbour.

“It seems absolute and utter madness. They might as well send a ferry over to France and pick up the migrants.

“At least you could vet people onboard and it would save a colossal amount of money.”

Asked to comment on the fisherman’s observations, the Ministry of Defence described the rise in crossings as “unacceptable”.

It pointed to the Rwanda relocation scheme – currently being delayed by human rights lawyers – and new powers that will allow people smugglers to be jailed for life as policies they hope will stop the crossings.

A Government spokesperson said of the Rwanda policy: “We are continuing preparations to relocate those who are making dangerous unnecessary and illegal journeys into the UK in order for their claims to be considered and rebuild their lives.”

Recently, Tory leadership candidate Penny Mordaunt told HOAR she believes more should be done to stop the flow of migrants from Libya across the Mediterranean to Europe.

She revealed: “I’ve spent a long time in the Mediterranean mapping migrant routes in the Med and North Libya. We should be doing more to work on what would be in France’s interest in regards to their Southern border.”

In the so-called New Jungle, close to Dunkirk on the French coast, I found many migrants who had followed the route Ms Mordaunt highlighted.

One of them, sheep farmer Mohammed, 17, from South Sudan, said: “I arrived in Italy by boat from Libya. The Italian authorities said to me, ‘If you want to go, go. France is that way’.”

He said of Britain’s mired policy to send asylum seekers to central Africa: “Rwanda is the same as my country. The Government there wants to control everything.

Like hundreds of others here, he will continue his efforts to reach Britain’s shores.

Standing out amid the squalor of ramshackle tents and discarded rubbish was blazer-wearing Ruot Bilieny Wich, 21, also from South Sudan.

The science student, who made the perilous crossing of the Mediterranean to Italy on a rickety boat with 24 others, said: “I like to keep smart, even though I’m living in a tent.”.

Undaunted by the threat of being sent to Rwanda, he is heading for Britain, saying: “I want to go to university. Britain is a safe country. You have democracy for everyone and I like the Queen.”

At the entrance to the New Jungle a blue Mercedes van with Albanian plates lies abandoned with its window smashed. Nearby is a burned-out wreck of another vehicle.

The 350-strong camp has taken on an air of permanency, with shacks selling groceries and cigarettes.

Makeshift cafes cook up minced land and salad baguettes costing £2.55 and a haircut at the Kurdish barbers is just over £4.

The camp residents are mostly Afghans, Kurds from Iraq and Iran, Eritreans and a large contingent from South Sudan.

Chelsea fan Livingston Khor, 19, from South Sudan, told me: “There is no security in my country.

“My dad was killed in crossfire during the civil war there. He wasn’t even a soldier.”

He is planning to reach the UK by lorry or small boat.

Friends Pazol Gabriel, 18, and Machar Choul, 20 from South Sudan, are also trying to rub together the “fare” for a seat on a dinghy.

They say they have heard about the Rwanda policy on the BBC.

They dread being sent to the African country — which they says is “as bad as South Sudan” — and want to reach the UK before September’s judicial review on the policy.

Student Pazol said: “My dream is Britain. I want to get there before they start sending people to Rwanda.”

The camp is a way station for migrants planning their dinghy rides across the Channel and — as we discovered — some coming the other way too.

A 24-year-old Kurd, originally from Erbil in Iraq, told how he had just crossed the Channel from Britain hidden in the back of a lorry.

Tucking into an egg baguette, he revealed: “I was in Nottingham and Bradford for two months but the UK is all money, money, money.

“I worked in a car wash for £20 a day but that doesn’t buy you anything. So now I’m going to try my luck in Germany.”

Yet migrants are still arriving in the UK by small boats in unprecedented numbers, the current 15,000 figure wasn’t reached until September last year.

Last week it was revealed that the Home Office’s top mandarin was handed a bonus of between £15,000 and £20,000 last year, despite presiding over the record migrant crossings.

Permanent Secretary Matthew Rycroft was paid the bonus on top of his salary of between £185,000 and £190,000. The bonus figure included payment for unused holiday.

The case of the high-tech drone that ended up in the drink won’t improve his department’s record. 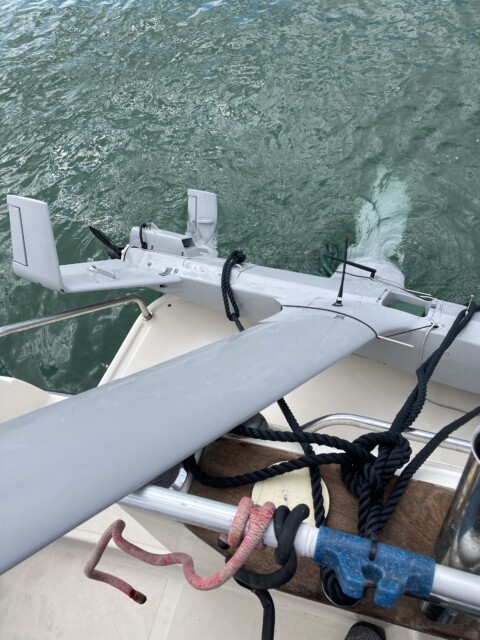 In July the drone was rescued by passing fishermen 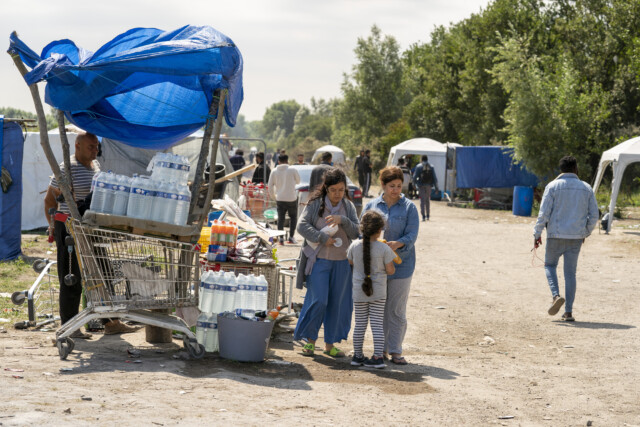 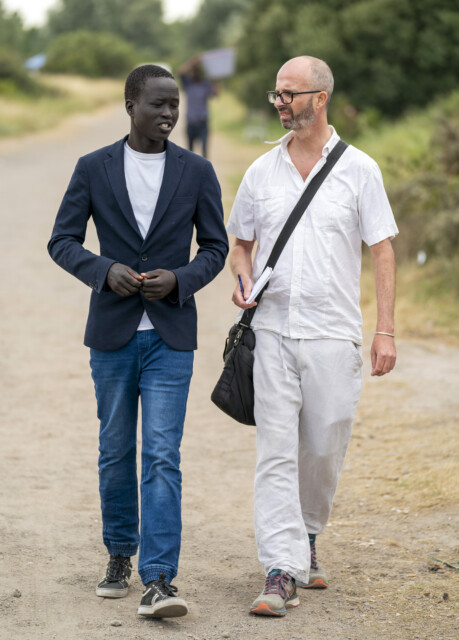 Prince William pays tribute to ‘much-loved’ nurse who died of Covid after working for...