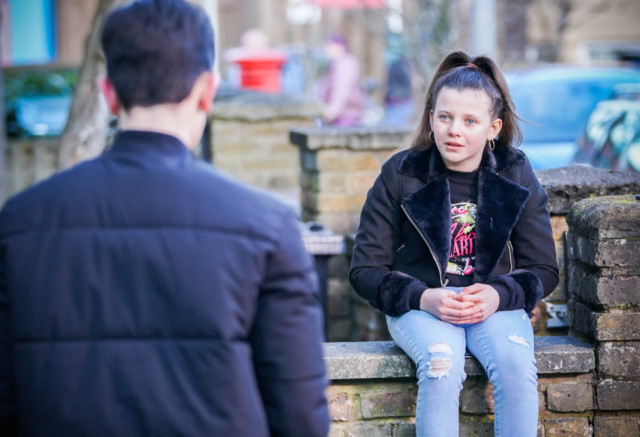 HARASSED by bullies in school and shaken by Phil Mitchell’s prison sentence, Tommy Moon is acting out.

As worries grow, Lily Fowler makes a discovery that won’t make matters any easier next week in EastEnders.

Portrayed by Sonny Kendall, Tommy has been having a rough time in Walford as of late.

But in upcoming scenes due on our screens next week, the schoolboy will only make things worse as a member of his family finds out he is past simply acting out.

While in school, Lily (played by Lillia Turner since 2020) is concerned when she sees Tommy is still being taunted by his bullies.

However her worry turns to shock when she cleans up and finds something incredibly troubling in the boy’s bag.

As mentioned above, Tommy’s behaviour in the long-running BBC One soap has been less than exemplary.

This is mostly due to him being continuously tormented by some of his classmates.

In recent instalments, the youngster asked for Phil Mitchell‘s (Steve McFadden) help, which led to the tough man to find Tina Carter’s remains in the Argee Bhajee – before being arrested.

With Phil behind bars, Tommy knew he wouldn’t be able to count on him to face the bullies but has refused to ask for any more help despite his mother Kat Slater (Jessie Wallace) asking to know if the bullying has stopped.

Recently, the owner of Kat’s Cabs has been fully convinced Tommy stole money from her business.

She remains unaware that the culprit was actually her cousin Jean (Gillian Wright), who is enjoying her rekindled relationship with cabbie Harvey Monroe.

More importantly, still, Tommy physically lashed out at Kat in recent episodes, leaving her bleeding after their encounter.

The scene shocked many BBC One viewers as Tommy had never been known for causing trouble.

But while his behaviour induces more concern from the people around him, Tommy’s struggles in school are far from recent.

In 2020, as Kat was still romantically involved with Kush Kazemi (Davood Ghadami), the young boy confided in the latter.

Tommy told Kush he hated school but when he thoughts about talking to his mother about his woes, the boy begged him to keep everything secret.

What did Lily find in Tommy’s bag and what will she do with the discovery?

How will Tommy ever be rid of his bullies?

EastEnders airs at 7:30pm from Monday to Thursday on BBC One. Tommy’s mother Kat is struggling to cope with his behaviour Tommy had previously asked for Phil’s help with his bullies

Did you miss our previous article…
https://www.hellofaread.com/soap-opera/coronation-streets-sally-dynevor-shares-picture-of-rarely-seen-son-sam-to-mark-his-birthday/

Grab the best bar none and say cheers to pub grub with our top...

Queen Elizabeth news – Her Majesty’s razor-sharp response to Prince Philip when he told...