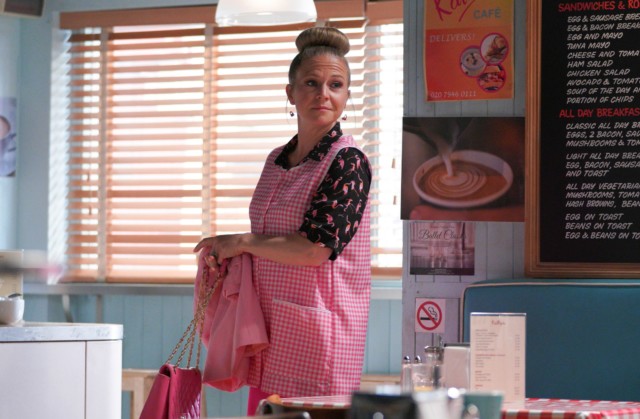 MICK Carter begs for a job at The Albert and Linda takes a job at the launderette next week in EastEnders.

Mick made the life-changing decision to sell their beloved pub back in April after Linda broke her sobriety and turned back to alcohol.

Linda starts a job at the launderette

EastEnders fans know that Linda was at the centre of a dark storyline tackling alcohol addiction for months.

But when Linda’s drinking nearly killed her and Mick during the soap’s 35th anniversary boat disaster, she was hit with a huge wake up call.

Linda was faced with an ultimatum – fight her addiction or destroy her family.

Since then, Linda has been on a slow road to recovery with the support of her loved ones. Linda has battled a booze addiction But Mick was devastated when Linda seemed to hit an obstacle and turned back to the bottle.

The event was a wakeup call for Mick, who realised that Linda’s living and working conditions would always be a setback for her sobriety as long as they had the pub.

Mick then announced that it was time for them to move to pastures new – and to sell the Queen Vic.

Next week’s episodes of EastEnders will see Mick desperately searching for a job as Linda begins work at the Launderette.

Later in the week, Mick confides in Tina that he’s desperate for work and she offers him a permanent job at The Albert.

But as Mick gets shown round the bar, Kathy does the same with Frankie.

When Kathy and Tina realise they’ve got their wires crossed, they start fighting over who should get the job.

But Mick bows out, letting Frankie take the job.

When Mick tells Linda what happened, she worries that the money from selling the pub won’t last forever.

Later, Tina gives Frankie a hard time and puts her through her paces, but Frankie soon ends up impressing Tina.

Will Mick find a job and put an end to their money worries?

9 new rules shoppers have to follow in Primark when it reopens tomorrow including...

The Masked Singer reveals the identity of Octopus as they are eliminated in the...