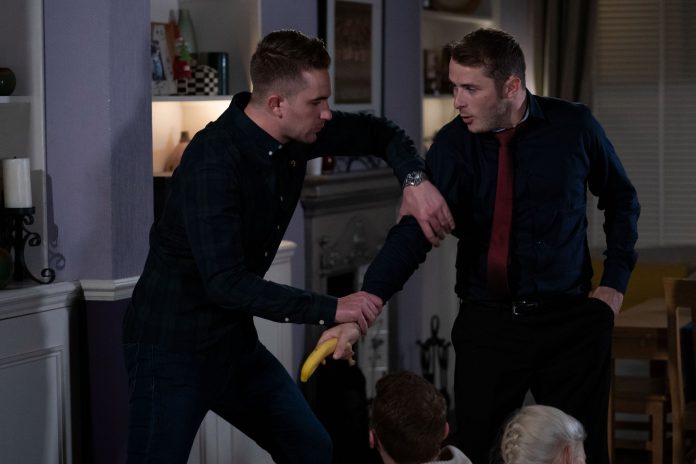 PHIL Mitchell’s business is in trouble in an upcoming episode as gangsters get wind that Bens boyfriend Callum is joining the police.

Ben – played by Max Bowden – has vowed to give up his life of crime to make his relationship work with Ben but in an upcoming episode his decision will threaten to destroy his family business.

Viewers will know that unlucky-in-love Ben finally let his guard down and decided to make a go of things with Callum after some poignant advice from Pam Coker.

But the pairs relationship hit rock bottom when Callum announced he wanted to join the police.

A devastated Ben then admitted to Callum that he didnt think there was a future for them if he became a copper.

Tension came to a head when Callum joined Bens family for lunch to honour the late Mel Owen.

He helps Callum with his training

When a bitter Martin Fowler got wind about Callums ambition to join the old bill, he didnt waste time in teasing Ben about it.

Ben and Callum then argued in the kitchen and as their feud blew out of proportion, Ben declared hed give Callum the boot if he joined the force.

But Ben began to soften when mum Kathy overheard him threatening Martin and delivered some home truths to the villain.

In a suprising turn of events, Ben’s conscience then kicked in when he sawMartin playing with Arthur and freed him from working for the Mitchell family. Enders fans will also know that Callum asked Ben to go completely legal with his business once he joined the police and that the villain agreed to turn over his business to Tubbs.

However, in an upcoming episode, it turns out that giving up a life of crime won’t be that easy for Ben.

In upcoming scenes,Ben turns down Tubb’s offer of a job and Tubbs is surprised to learn Callum is joining the police.

In a disastrous turn of events, Phils associates then get wind of the copper relative and withdraw from various deals.#

As Ben helps Callum with his training, Shirley goes looking for Ben.

She warns him that his involvement with Callum could jeopardise the family business.

Will Ben manage to solve the problem?

Enders fans will have to tune in to find out.

When will Hollyoaks be back on TV?