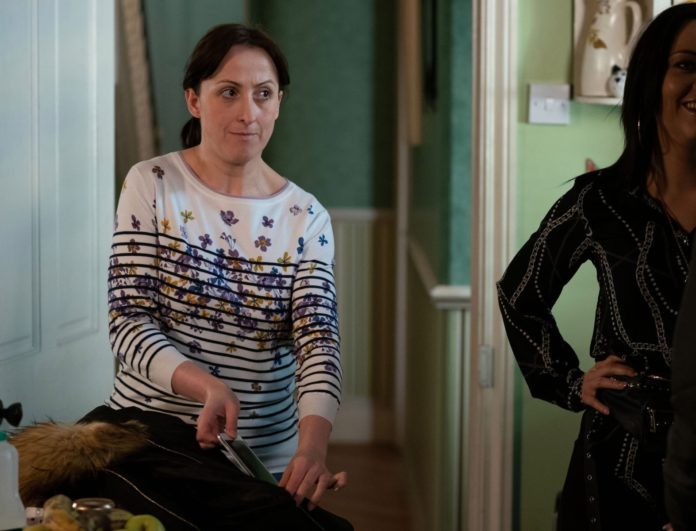 WHITNEY Dean decides she’s got no option other than to flee the country after Leo King’s mum convinces her that she’ll be found guilty.

The long-suffering stallholder has been charged with murdering Leo and is awaiting an appearance in court in upcoming scenes.

EastEnders fans will know that Whitney has finally been released from prison on bail and is back in the Square.

But it soon became clear that it’s far from over for Whitney as Leo’s mum Michaela arrived in Walford and began to spy on her.

Michaela then gave Whitney a piece of her mind and raged at her for causing Leo’s death, leaving a terrified Whitney convinced that she’d be going to prison for the crime. Whitney fears she’ll be sent to prison for killing Leo

Next week’s episodes of EastEnders will see Michaela step up her campaign of hate against Whitney.

The upcoming scenes will see Sonia try and encourage the stallholder to carry on as usual. But Sonia is horrified when she discovers that Leo’s mother has posted something online slandering Whitney.

While working on her market stall, Whitney begins to notice people looking and gawping at her.

Sonia and Chantelle try and keep the reason for all the stares secret from Whit, but she eventually sees Michaela’s post for herself.

Max later visits a distressed Whitney and makes things a whole lot worse by telling her about how awful his time in prison was.

Whitney is terrified that she’ll be put behind bars and decides it’s time to take matters into her own hands. Whitney plans to escape from Walford and flee abroad

But what’s she up to?

Later, Whitney’s plan becomes crystal clear as we see her clutching her passport.

Will Gray stop Whitney in her tracks before she tries to flee the country?

Whitney’s mum Bianca – who is played by Patsy Palmer – is set to return to the Square to help her daughter through her murder trial.

The mother last saw her daughter back in September 2019 for Whitney’s wedding to Callum – that never actually happened.

Could Bianca be about to return to teach Michaela a lesson or two?

Inside Love Islands boozy afterparty as winners Paige and Finn let loose in the...