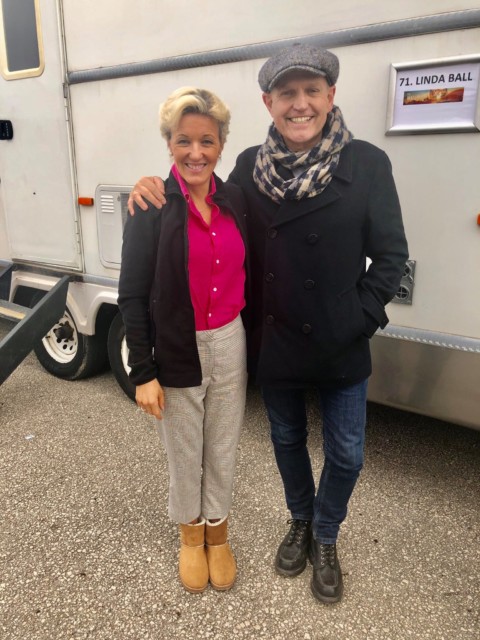 EASTENDERS’ Kacey Ainsworth looked miles away from Little Mo as she showed off her blonde hairdo for new BBC drama.

The actress, 52, looked completely unrecognisable with short blonde hair on the set of The Mallorca Files.

She showed off her chic hairstyle wearing a neon pink shirt, black fleece, pair of ugg boots and subtle make-up.

The actress shared snaps behind-the-scenes with co-star Tim Whitnall, writing: “Look at that fake tan! Not sure it suits a Scottish/scandi like me .

“When we could travel to film. Happy memories! Mallorca Files all this week or BBC iPlayer.”

The Mallorca Files is a British drama series starring Elen Rhys and Julian Looman as a pair of detectives, it returned earlier this week for a second series. The actress is now back to work after she revealed that she had tested positive for Covid in December.

She tweeted that she’d been struck down on the day that national lockdown restrictions ended, saying: “After years in the business my timing is usually impeccable. seen my dogs n the sheep.

“Sheep and my family only but I have tested positive for Covid on the day everyone can go out.

“Feel gutted but mostly feel Huge gratitude that I’m fine thinking of those not so fortunate #herd.” In January, Kacey revealed that she was temporarily giving up acting after her discovering that her 11-year-old son Elwood was on the autistic spectrum aged six.

She played downtrodden Little Mo in the BBC One soap between 2000 and 2006.

Mo famously attacked her husband with an iron – facing prison for attempted murder before being released without charge. Trevor died in a fire in 2002, with Mo going on to briefly find love with Billy Mitchell.

Kacey quit the show in 2006 to pursue other projects, and previously ruled out returning to Walford – even though much of her onscreen family have returned to the square in recent months.

Emmerdale’s Daisy Campbell horrified as police pull her over on birthday night for shock...

Boris Johnson promises business bosses Brexit will be done in WEEKS if he wins...