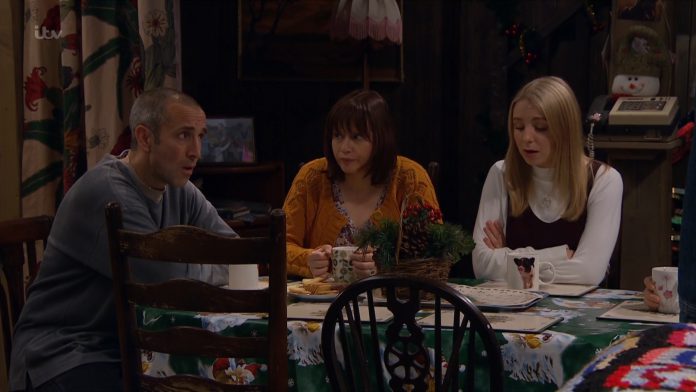 EMMERDALE fans are fearing a Dingle family war as the clan reject cheating Nate Robinson to finally side with his biological dad, Cain.

The hard man has been furious with his normally loyal family after they took his prodigal son into their ranks.

Cain told the family to “go to hell” before storming out when he caught them watching a film with Nate on Tuesday.

But tonight’s episode saw Nate’s efforts to enter the Dingle clan increase – as he told Cain’s son Kyle that he is his brother.

Charity agreed to babysit Kyle, only to give the little Dingle off to Sam. However, Sam was spending time with Nate, which meant Charity conspired to get Nate and Kyle in the same place together.

It was then Nate revealed he was Kyle’s brother, much to the fury of dad Cain.

During a blazing row with Sam, he gave the family an ultimatum.

He said to Sam: “So, you think I should just forgive and forget then? I’m sick of it.

“I could’ve binned Moira years ago after what she did, but I gave her another chance. And she betrayed me again.

“So if that’s what family’s about then I don’t want to know.

“Lisa’s gone, my dad’s in Scotland with Debbie, my marriage is over. All I’ve got left is my kids and you lot. You just let Nate see Kyle.”

Cain replies: “Brothers don’t always stand by each other, do they?”

Sam still won’t let it go, saying: “I’m always going to stand by you, all right.”

Cain then offers the ultimatum: “Prove it. Or if you lot go play happily families with Nate, then you’re all dead to me.”

Oh my god can the Dingles just make up their damn minds about Nate, either he's family or he's not #Emmerdale

At the end of the episode, the family tell Nate that they can no longer stand by him and he storms out of the house in a rage.

Much like his dad, Nate has a fiery temper and now the Dingles fear a bloody feud is on the way.

Fans are also worried, with one person saying: “Dingle court says no to Nate! #emmerdale.”

Another added: “I feel so bad for nate. He doesn’t deserve to be treated like this by his family. #Emmerdale”

A third said: “Cains screwed over every single dingle. Hes such a hypocrite #Emmerdale”