EMMERDALE fans fear the soap’s next serial killer has claimed their first victim after Charles’ life was left hanging in the balance.

The vicar, played by Kevin Mathurin, was found unconscious on the floor of the church by his partner Manpreet in tonight’s episode.

Manpreet found Charles unconscious on the floor of the church

Frantic, she asked Harriet to call an ambulance, before he was rushed to hospital.

The doctor then told Manpreet he had suffered a subarachnoid hemorrhage and was in an induced coma, adding that the next few hours were crucial.

As his life hung in the balance, Manpreet accused Charles’s long-lost daughter Naomi, played by Karene Peter, of causing his injury after hearing them argue in the church moments before she found him on the ground.

The village vicar recently tried to patch things up with his daughter but she refused to form a bond with him, seeming more interested in his money than anything else.

Manpreet heard their raised voices as she headed towards the church before witnessing an angry and upset Naomi burst out of the door and away from the building.

As Naomi watched the ambulance arrive, she was clearly shaken, before Harriet arrested her on suspicion of assault.

Some Emmerdale fans are already convinced Naomi is going to follow in serial killer Meena’s footsteps and become the latest killer in the village.

Their theory was bolstered after Manpreet compared Naomi to her wicked sister, telling Ethan about the rage she had heard in Naomi’s voice as she shouted at Charles in the church.

She said: “I’ve heard that rage before, she sounded like Meena.”

One wrote: “I think Naomi did it! Emmerdale needs to watch out!”

Another added: “Could Naomi be a killer?”

While this fan was unsure: “I doubt Naomi attacked Charles. It would be too obvious.” 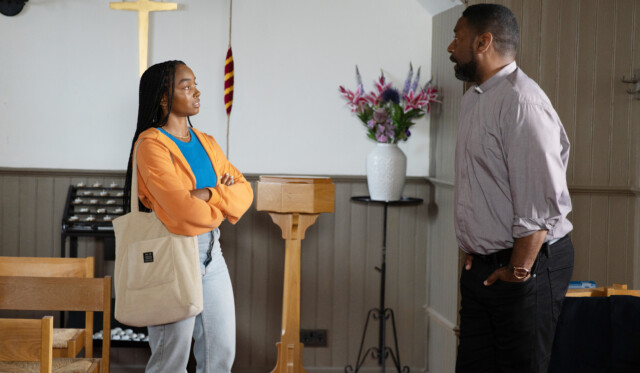 Charles had been arguing with his daughter Naomi in the moments before he was found
Did you miss our previous article…
https://hellofaread.com/soap-opera/furious-coronation-street-star-planning-tell-all-book-after-announcing-shes-quitting-acting/

Warning to millions of mourners who will queue to pay their respects to the...

Gogglebox’s Amy Tapper shows off slimmer than ever body in baggy top as she...

One in three firms are preparing to lay off staff before furlough ends in...