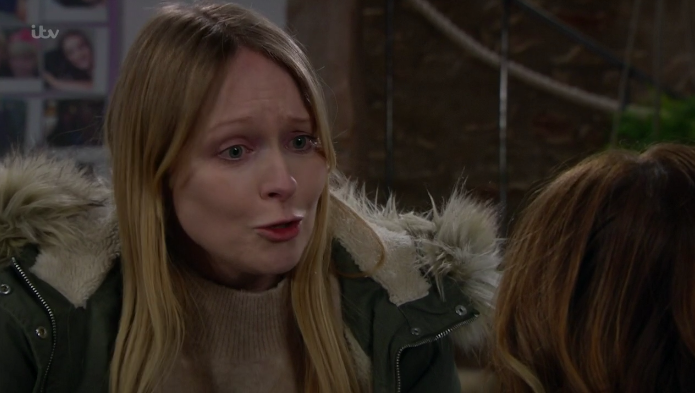 EMMERDALE fans were left feeling heartbroken for Charity Dingle tonight after her fiancée Vanessa Woodfield announced her new plans for son Johnny if she dies from bowel cancer.

Vanessa has decided that she would feel “safer” if her best friend Rhona Goskirk was to care for four-year-old Johnny if the worst was to happen in her fight with the disease.

Vanessa made the shock decision tonight

But after being urged by Rhona to tell Charity about her new plans, emotions soon ran high.

Furious and hurt about her decision, Charity told Vanessa that her “feelings don’t matter”.

Charity blasted: “What you think is what counts. You’ve made that crystal clear.”

And when Vanessa insisted that she “loves” Charity, she shot back: “Well you’ve got a funny way of showing it sometimes.” She asked Rhona to take care of Johnny instead

Vanessa’s change of heart came after she asked Charity last week how she would feel about become Johnny’s guardian if she loses her fight with cancer.

But when Charity hesitated, as she was caught off guard, it made Vanessa have a rethink.

Explaining her hesitation tonight, however, Charity insisted: “I had a moments thought. I didn’t realises hesitating was a crime!” Earlier tonight, Vanessa was first seen asking Rhona what she thought of the new plan.

Rhona was also shocked at Vanessa’s request but agreed – on the basis that she discussed it with Charity.

Vanessa had told her best friend: “[Charity] doesn’t want to be lumbered with Johnny when I’m gone.”

She went on: “I just need to make sure Johnny is going to be okay when I’m gone.

“I want everything to be in place and think you will be ideal.”

Continuing to put her case forward, Vanessa added: “I’ve known you a lot longer. Knowing you would be there for Johnny would be a weight off my mind.

“Seeing the way you care for Leo, I know Johnny would be safest with you.”

Did you miss our previous article…
https://www.hellofaread.com/soap-opera/coronation-streets-gary-risks-adam-exposing-his-killer-secret-as-he-jumps-in-to-defend-kelly-in-a-row/

Love Islands Mike Boateng quit the police as he was better at chasing women...

Meghan Markle ‘won’t stay with Prince Charles despite his olive branch as it will...

Meghan Markle ‘gave backing’ to pal to appear on This Morning ‘hours after agreeing...