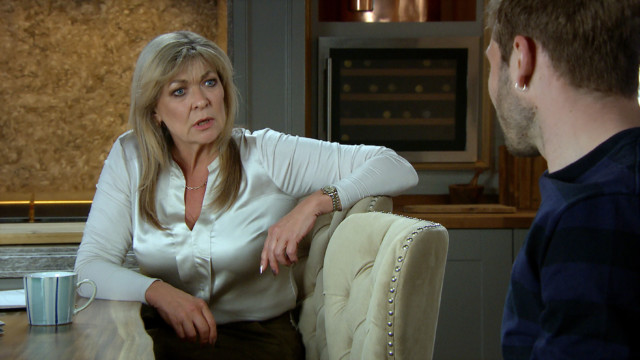 EMMERDALE’s Kim Tate faked her own death this week in an outrageous twist.

The Queen of Home Farm – who is played by Claire King – teamed up with her ex Will Taylor to get revenge against her son Jamie Tate after discovering he was the one poisoning her. But what does she have in store for the villain? Here’s the lowdown…

What happened to Kim Tate in Emmerdale?

Last night’s episode of Emmerdale saw Kim taken to hospital in a private ambulance as the soap’s poisoning plot came to a climax.

Jamie thought he was setting up his girlfriend Dawn’s dad for the crime, but his plan backfired horribly when he arrived home to Kim in a body bag and Will’s arrest.

Jamie was told Kim was being taken to a private hospital – and that he had to leave the property for the police to carry out forensics.

However, in an outrageous twist Kim later stepped out of the ambulance and revealed her plan for Jamie.

Viewers know that Kim has been desperately trying to hunt down the identity of the person who’s been poisoning her in the soap.

For weeks, Kim thought she was suffering from Alzheimer’s.

She finally twigged that someone was tampering with her brandy decanter when her cleaner Lydia took a swig and immediately felt dizzy – and started plotting her revenge.

Jamie tried to frame Will for the crime

Has Kim Tate died in Emmerdale?

Fans quickly cottoned onto the fact that Kim Tate was faking her death in last night’s episode.

Viewers pointed out that the doctor taking Kim to hospital said she had “diazepan” in her system before correcting himself and saying “diazepam”.

The slip up left fans convinced that the doctor must be working for Kim – and it turned out they were right.

So no, the Queen of Home Farm hasn’t met a grisly end just yet.

In an explosive week of episodes available to watch now on ITVHub, Kim will take terrifying revenge on her son and cast him out once and for all.

Jamie will be cut off from Kim’s millions in the process.

But could Kim be biting off more than she can chew with Jamie? Kim will take her revenge against Jamie in upcoming scenes

There’s no word as yet on whether Kim Tate is leaving the ITV soap.

But with Jamie and Kim set to lock horns when she shocks him with the revelation that she faked her death in upcoming scenes, could she end up dead for real?

With Emmerdale keeping shtum, viewers will have to tune in to find out.

This week’s episodes of Emmerdale are available to watch on ITV Hub now.

Brexit fishing deal ‘will lead to blockades at Calais’ from the French, experts warn

Who is Im A Celebrity Medic Bob McCarron?