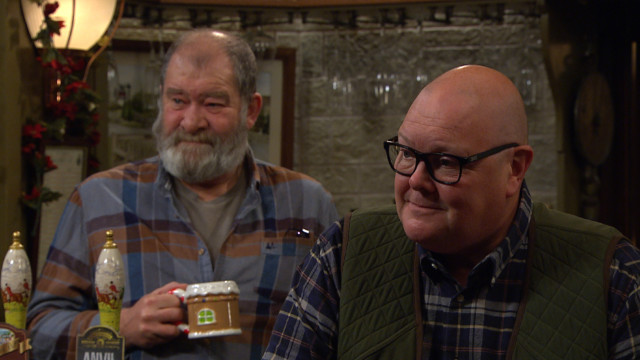 CHARITY Dingle sabotages Chas and Paddy’s wedding next week in Emmerdale when she doesn’t get an invite.

The Woolpack landlady is on a path of self-destruction after cheating on Vanessa – who is currently away from the village battling cancer – and getting dumped via video call.

To make matters worse, Charity then discovered that it was Tracy Metcalfe who had informed Vanessa that she kissed someone else.

Heartbroken Charity then turned to the bottle and headed on a downward spiral, irritating her family and friends even more by self-destructing.

Upcoming episodes of Emmerdale will see Chas tell Paddy that Charity won’t be invited to their Christmas dinner.

Disaster strikes when Paddy and Marlon realise they haven’t sent out any wedding invitations yet.

Chas and Marlon try and keep their plan secret from Chas Paddy moans that none of his plans are going the way he’d hoped, but Marlon comes up with a plan to hold the reception in the beer garden and Paddy is relieved when Leyla agrees to help them.

Meanwhile, in the Woolpack, a row breaks out when Chas tries to get Charity to see that she’s neglecting Noah.

Later, Charity overhears wedding talk at the church and is gutted when she hears the team say they’re grateful she hasn’t been invited.

Later in the week, Charity is fuming when she discovers that Ryan has received an invite to the wedding.

Charity dresses herself in funeral attire and heads out guns blazing.

But what is she planning?