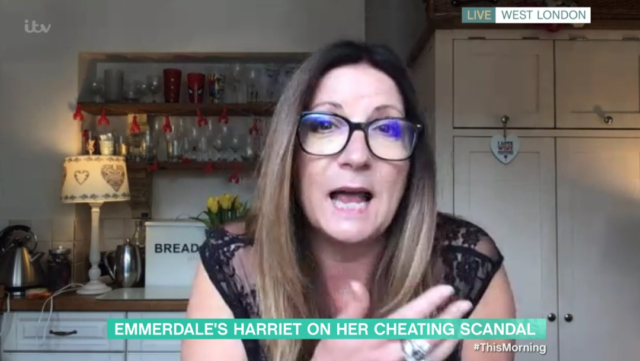 Katherine, 55, revealed coronavirus lockdown has put the brakes on their steamy romance after fans raged to Ofcom about scenes that aired on the ITV soap on Monday.

She told This Morning’s Eamonn Holmes and Ruth Langsford today: “Obviously there is a deep feeling there and attraction and she’s so sick of Will.

“But I’m not involved in the isolation episodes that are happening now … there will be no snogging!”

“Hopefully we can get back to this storyline because we left it on a cliffhanger.”

Katherine revealed their chemistry goes way back to their time working as cops – and it’s far from over. She said: “She’s into bad boys, what’s a girl going to do?

“When they worked together they had a fling but she didn’t know he was a bent cop, now she’s only just discovered that since all this stuff came out with Will.”

But Emmerdale viewers complained to Ofcom after the vicar’s antics in the the village church on Monday night.

The frustrated clergywoman spent the afternoon in the vestry with the corrupt cop with only a curtain stopping her from being caught by her parishioners. The sacrilegious scene proved too much for two viewers who wrote to the broadcasting regulator while countless more vented about it on social media.

And to compound their anger, the pair romped again last night but this time in a hotel.

Viewers know Malone and Harriet share a history with the pair having had an affair years ago when they were both police officers.

Harriet is fully aware that Malone is corrupt and is the man who has blackmailed her boyfriend Will into dealing drugs for him.

And despite saying she was sickened by Malone, it didn’t take the vicar long to fall back into bed with him.

In Monday’s episode the pair romped in the church before they were interrupted by Will’s daughter Dawn. DI Malone has his claws back into Harriet Dawn almost caught them together

@emmerdale Harriet must be the loosest vicar in the land. She's had more men than Bet Lynch.

Malone and Harriet is actually disgusting, someone pass me a bucket #Emmerdale

For goodness sake. You have ruined Harriet as a redeemable & sympathetic character now with another sordid horrible affair like you done with Moira. What is it about obsession with strong sensible women suddenly losing any reason & being manipulated by grotesque males #Emmerdale

She nearly caught them but Harriet managed to stop her from finding a partially dressed Malone.

And after she’d sent Dawn packing, Malone made it clear the pair were about to go for round two leaving viewers sickened.

One wrote: “Harriet you are an absolute disgrace. In the church of all places too. What a slackly written character.”

A second said: “Is there anyone Harriet hasn’t banged in the church ?”

Another added: “First Harriet sleeps with Cain in the Church Vestry & now Malone really? So much for being a totally ‘Respectable’ Vicar, espwhen she knows what he did to Will.”

A fourth raged: “Maybe Harriet’s actually planning on bringing down Malone from the inside? If not she’s just a total BITCH. He’s obviously just using her to get one over on Will, how the hell can she NOT see that?”

Three Brits including a child killed in Kabul suicide bomb blast & 2 others...

Sexy celebrities are feeling festive as they slip into Christmas lingerie